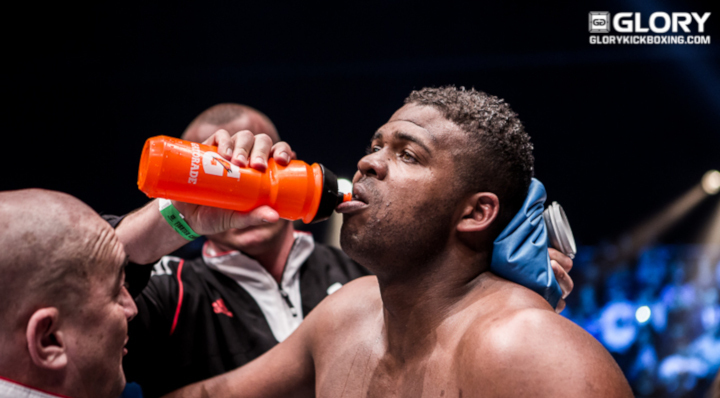 After cheating death, Jahfarr Wilnis now out for revenge at GLORY 58

In late 2015, Jahfarr Wilnis (31-9-1, 8 KO’s) began feeling a little unwell. Fatigue seemed to be creeping in earlier in his training; sleep left him unrefreshed.
And over the following two years, things steadily worsened, to the point where he felt constantly exhausted no matter how much rest he got.
At one point, he told his wife that he felt so drained, he was beginning to fear falling asleep, worrying that he might not wake up again.
She told him he was “crazy” to talk like that, but at the same time insisted that he finally seek medical attention. So he did. After some testing, it turned out that there was indeed something very wrong with him.
“It was my lungs,” he says. “I had blood-clots in my lungs, and it was partly filling them, which meant I was not able to absorb enough oxygen into my bloodstream.
“I felt weird for so long, like tired all the time even though I was physically fit and careful with my diet. Suddenly I knew why. And on the day I was diagnosed, I felt like lying down right there outside the clinic, I was so drained.
“Well, they told me that if I had done that then yeah, maybe I wouldn’t have woken up. It turned out I had been right - there was a risk that I could have just gone to sleep and not woken up.
“And if I had collapsed outside the clinic, they said CPR wouldn’t have worked because there was so little oxygen in my blood.”
What Wilnis had experienced is called a pulmonary embolism.
The usual cause is a blood clot in the leg, known as a deep vein thrombosis (DVT), detaches itself and ends up traveling to the lungs, where it causes a blockage that leads to low oxygen levels  and can cause heart failure.
The risk of developing DVT is heightened by long-haul air travel, where the legs are often inactive for hours at a time.
Wilnis estimates that he flew long-haul “fifteen or so times” during 2015, flying as much as 14 hours at a time, and that this is what prompted the DVT.
So when he returned to GLORY in May this year, for the first time since GLORY 35, he really wasn’t lying when he said he would show everyone “a new Jahfarr Wilnis”.
He set a ferocious pace as he barraged Jamal Ben Saddik en route to a one-sided decision win. Now he moves on to face Benjamin Adegbuyi (30-5, 18 KO’s) at GLORY 58 CHICAGO next weekend.
It’s a fight with a lot of significance for Wilnis.
First, Adegbuyi is ranked #1 at Heavyweight, meaning a win would enter Wilnis into the title contender conversation. Second, they previously fought at GLORY 24 DENVER, with Wilnis losing a split-decision that he bitterly disputes to this day.
“I thought I won that fight, definitely. So this is a rematch I have wanted for a really long time, to set things straight,” he says.
“And also, I’m feeling good and healthy now. Back then I wasn’t. So I’ll be coming for my revenge in Chicago.”
Wilnis and Adegbuyi are actually quite friendly outside the ring and have even been out for drinks together, but both fighters say it will be “strictly business” in next week’s encounter.
likewise, Wilnis says that he will be calling for a title shot against Rico Verhoeven if he wins, but that is also “strictly business”.
“Rico is a friend of mine, we’ve trained together a lot, but he has the belt and I want that,” he says.
“Look, we’re all pros. We talk to each other, train together, laugh together. But in the ring it’s business, so if I win this fight I want a title shot.
“And it’s not that I am calling Rico out or taking some personal swipe at him, nothing like that. I just want that belt he’s got. This is the fight game: no hard feelings, nothing personal. We’re here to do business.”
GLORY 58 CHICAGO takes place Friday, September 14 at the Sears Centre Arena in Hoffman Estates, Chicago, Illinois.
The card is Headlined by Middleweight champion Alex Pereira defending his title against former champion Simon Marcus.