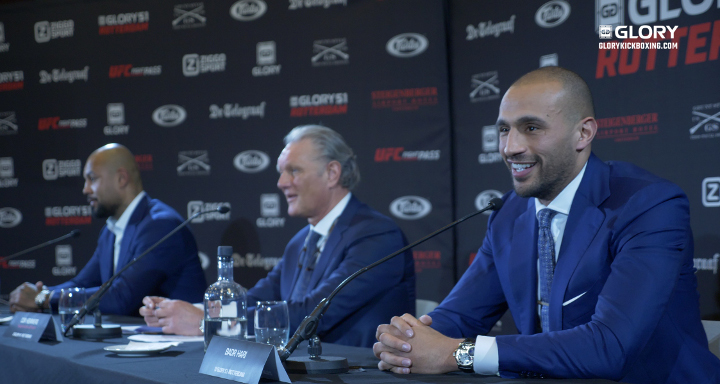 Heavyweight kickboxing icon Badr Hari (106-13, 92 KO’s) was the center of attention at Wednesday’s pre-fight press conference for GLORY 51 ROTTERDAM, which takes place Saturday, March 3 at the Ahoy Arena, Rotterdam.
During the press conference, he was asked several times by media to look past the imminent rematch with Hesdy Gerges (50-19, 23 KO’s) and address the possibility of a rematch with Heavyweight champion Rico Verhoeven later this year.
One questioner even went so far as to ask him if the Gerges fight was a ‘warm up’ for that eventuality.
“It’s rude to ask if it’s a warm-up fight!” Hari responded, seeming genuinely offended on Gerges’ behalf.
“Rico might be a warm-up fight. Hesdy is not, by any means. He is a serious fighter, serious opponent. If you underestimate him you have lost the fight before you know it.
“If you look at the shape I am in, that will show you its not a warm-up fight. If I am not careful I might lose this fight.
“There is no rematch set with Rico Verhoeven. We haven’t even discussed it. I think this fight with Hesdy is important and Rico isn’t currently important. But I am fighting for money - If they pay me well, then the fight with Rico can take place.
“[Rico] is a great sportsman, very important for the sport, he has shed a very positive light on kickboxing and he’s a great opponent. But no fight has been scheduled. I have this fight against Hesdy and we will see what comes afterwards.”
The conversation then moved on to the subject of Hari’s intentions for his 2018 competition schedule and how many fights he would like to have this year.
“This sport is really tricky, it’s a hard sport and it involves a lot of injuries, so I cant really plan for a long period ahead. We take it fight by fight. Nevertheless I signed for a series of fights with GLORY and I am looking forward to doing this,” he said.
“Also I would like to thank GLORY. I don’t say this enough, but I haven’t been part of the sport for a long time and GLORY ensured that I was able to become a part of the spot again and this is actually an additional motivation for me.
“I think I am currently peaking in terms of maturity. If they offered me similar contract a couple of years back I don’t think I would have taken it as seriously as I do now. But I reflected and said let’s go for it. The best is yet to come! I think we will see some great performances.
“I am 33 years of age and that is not old. Roger Federer is 36 and he won the Australian Open. Vladimir Klitschko was doing fine until he came across Anthony Joshua. It seems to me we [Heavyweight fighters] become mature more slowly and last longer.
"If I look at fighters in the division I can take on anyone. There is little competition [for me in this division] at the moment and I want to prove this, starting on March 3 with Hesdy.”
GLORY 51 ROTTERDAM takes place Saturday, March 3 at the Ahoy Arena in Rotterdam, Netherlands, with Hari and Gerges in the Headline slot.
Tickets are on sale now, with a limited number remaining available. Click here to secure yours today.