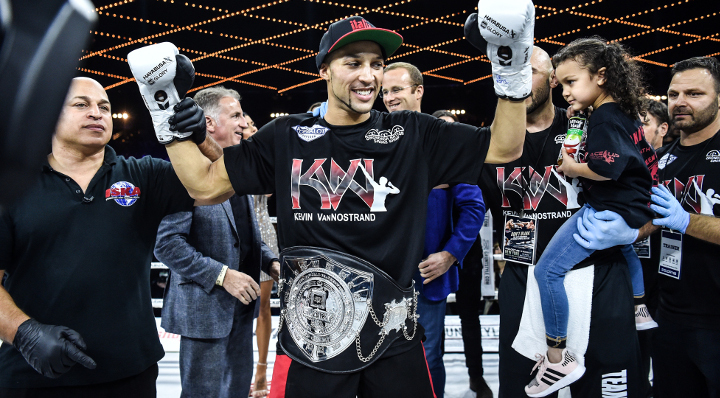 Interim world Featherweight champion Kevin Vannostrand will be forever remembered in his home city of Syracuse, New York.
This week the legislative council of Onondaga County, New York - of which Syracuse is the county seat - voted to declare December 16 to be ‘Kevin VanNostrand Day’ in recognition of his achievements in the sport of kickboxing.
VanNostrand clinched the GLORY Featherweight interim world championship in front of a packed Theater at Madison Square Garden on December 1.
He won the title in thrilling fashion; his rival Anvar Boynazarov knocked him down around forty seconds into the fight and looked sure to finish him off. But VanNostrand’s iron will kept him in the fight and when Boynazarov hunted forwards looking for the finish, he ran onto a savage knee strike which sent him to the canvas in agony.
It was immediately clear he would not be beating the referee’s count; VanNostrand jumped up onto the ring ropes and celebrated his win, to the delight of his traveling fans. He now sets his sights on the unified world title in 2018.
“A champion is made from being knocked down, getting back up and persevering and succeeding. That is the definition of Kevin VanNostrand,” says his manager Amer Abdallah.
After the ceremony, VanNostrand declared himself “grateful to my community, family and friends” for their support and said the declaration of a day in his honor is “most humbling”.