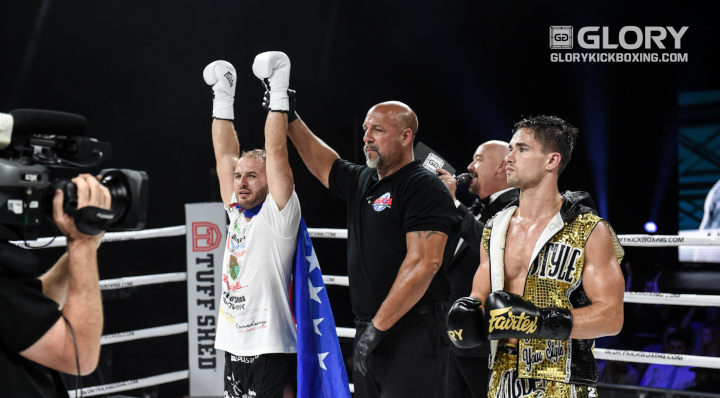 The GLORY 55 Main Card opened with a Lightweight battle between Americans Elvis Gashi (21-0, 10 KO’s) and Nick Chasteen (8-5, 3 KO’s). Gashi aimed to keep his perfect record intact as he took on the GLORY newcomer.
The New York crowd was firmly behind Gashi as the fight began. The taller fighter Chasteen stayed at range early, looking for counter knees as Gashi advanced. Gashi closed the distance and scored with a head kick that surprised Chasteen.
The pair traded inside leg kicks before Gashi started finding a home for his straight left hand. Chasteen answered with a right hand of his own late in the round.
Gashi’s kicking attack was on display early in round two. He changed levels, hitting Chasteen in the midsection and head. Chasteen fired a straight right to back off the aggressive Gashi.
A body shot from Gashi forced Chasteen to cover up along the ropes. Gashi delivered an onslaught of punches, but Chasteen was able to stay on his feet and survive the stanza.
Chasteen greeted Gashi with a right hand as the final round started. Gashi egged on Chasteen as he came forward. The left kick of Gashi repeatedly thundered against the body Chasteen.
A combination of punches from Gashi was followed by a knee along the ropes, but Chasteen wore it well as the fight went the distance. Gashi picked up his 22nd career victory with the decision win.
“I promise we’re going to get that title. We’re going to bring it to New York. I’m ready, give me that title shot,” declared Gashi.
Elvis Gashi def. Nick Chasteen by unanimous decision (29-28, 30-27, 30-27)