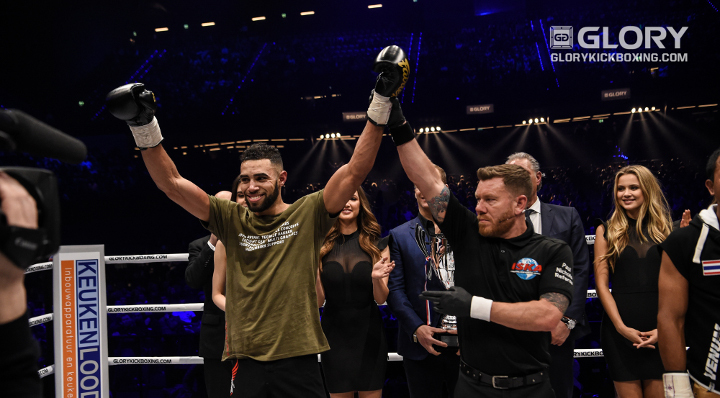 Eyevan Danenberg won the Welterweight Contender Tournament at GLORY 51 ROTTERDAM, but didn’t have fun doing it.
Danenberg had back-to-back fights with two Muay Thai stylists - Jimmy Vienot of France and Thongchai of Thailand - to secure victory and confessed afterwards that both represented his least-favorite style of opponent.
“Muay Thai fighters are awkward because of all the clinching and also they way they fight, just looking to land one thing all the time, it makes it a bit difficult sometimes,” he said.
“But I got the win and now I think that must put me in the top five, maybe even the top three. I don’t care who they want to put me against next but it has to be someone from at least the top three.”
In the final he outpointed Thongchai, who had won a very controversial split-decision over Alan Scheinson in the semi-finals.
Thongchai was fighting for the first time since his loss to Murthel Groenhart at GLORY 38 CHICAGO in February last year. Since then he’s been undertaking national service in the Thai army.
His camp have frequently bemoaned his lack of motivation and tendency to goof off instead of training, but the army has apparently worked wonders with him. Being fairly unrestricted in the measures they can use to correct errant behavior, they were quickly able to persuade Thongchai to behave.
Scheinson came into the tournament with a 1-2 GLORY record, but with those two losses being by way of split-decisions to Karim Benmansour and former champion Murthel Groenhart, neither reflects badly on the Argentinian.
They had an ugly fight, marred by frequent and repetitive bouts of clinching. Scheinson blamed Thongchai, and the Thai was threatened with a point deduction at one stage, but there were also times Scheinson tied Thongchai up.
Still, after three rounds it did seem that Scheinson had had the better of the scoring. The judges didn’t see it that way; three of the five had Thongchai as the winner, giving him a win by split-decision.
To say Scheinson was upset would be putting it mildly. He was apoplectic when he left the ring and had to be gently persuaded not to smash his dressing room up once he got backstage.
Danenberg entered as tournament favorite and brought with him a 3-1 GLORY record, with back-to-back wins in his last two outings. He’s been steadily climbing the rankings and has started looking like a fighter who will enter his name into the title picture this year.
In his own semi-final bout he bested Jimmy Vienot, who debuted at GLORY 47 LYON last year with a split-decision loss to Alim Nabiyev.
Given Nabiyev’s subsequent domination of former Welterweight champion Nieky Holzken in his next outing, there’s no shame in that result for Vienot. But he couldn’t find a route to clean scoring on Danenberg either, so his GLORY record now sits at an unwanted 0-2.
Eyevan Danenberg def. Thongchai Sitsongpeenong by unanimous decision (29-28, 30-27, 30-27, 30-27, 30-27)
Eyevan Danenberg def. Jimmy Vienot by split decision (30-27, 30-27, 28-29, 28-29, 29-28)
Thongchai Sitsongpeenong def. Alan Scheinson by split decision (29-28, 29-28, 28-29, 28-29, 29-28)