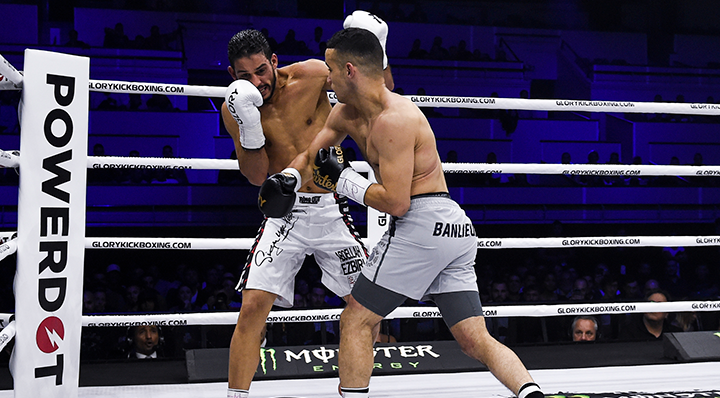 Groenhart, of Amsterdam, Netherlands, has spent nearly a decade at the very top level of the sport, either fighting contenders or defending championships. Jones, of Minneapolis, Minnesota, has a fraction of that experience, but jumped at chance to face ‘The Predator’ after injured Welterweight champion Cedric Doumbé vacated the slot.

In the opening minutes of tonight’s main event, the gamble looked set to pay off. Jones took a technical approach against Groenhart, who is more usually to be found in firefights and close-range brawls, and found himself scoring often with the jab.

Rather than push the pace, Groenhart played the game. This allowed Jones to rack up points but Groenhart - who has more championship fights on his record than Jones has regular bouts - had a bigger prize in mind.

Having gotten the measure of Jones’ timing, he waited for his opportunity. It came in the middle of the second round - Jones stepped in for a right cross, only for Groenhart to  intercept it with a right hand of his own.

Jones was knocked down and, despite beating referee Paul Nicholls’ count, was clearly rocked when he returned to the fray. Here ‘The Predator’ lived up to his nickname - he leapt upon Jones and hammered him mercilessly until felling him with a blow that had Nicholls waving the fight off without even entertaining the formality of a count.

The win makes Groenhart the GLORY Interim World World Welterweight Champion and sets him on inevitable collision course with Doumbé, who was ringside at tonight’s event. The two got into an argument mere moments after Groenhart had his hand raised as the winner, leaving little doubt that their rematch will be one of the most heated fights in the sport’s history.

An honorable mention also goes to Preliminary Card fighter Cedric Do (16-5, 9 KO’s), who announced himself as a talent to keep an eye on via a three-knockdown stoppage of the experienced Mehdi Kada(14-4, 5 KO’s) in the second round of their fight, and the 'Fight of the Year' contender staged by Guerric Billet (31-4, 14 KO’s) and Mohammed Hendouf (36-6-1, 8 KO’s) on the SuperFight Series card.