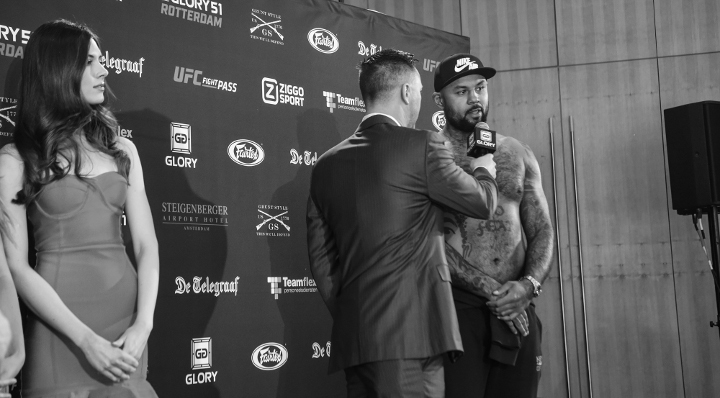 Hesdy: “I didn’t see any fire in him”

Hesdy Gerges (50-19-1, 23 KO’s) and Badr Hari (106-13, 92 KO’s) came face to face at today’s official weigh ins for GLORY 51 ROTTERDAM, which takes place Saturday night at the Ahoy Arena in Rotterdam, Netherlands.
It was the second time the two had stared each other down in recent weeks, the first occasion being at a January press conference in Amsterdam.
When they fought in 2010, the intensity of their pre-fight staredown would probably have set light to any flammable object placed between them. But Gerges claims he felt nothing similar from Hari this time.
“I felt confidence in my self, 100% confidence. But I didn’t see it in his eyes. If you look back at the staredown before our 2010 fight it was like two animals who were ready to kill each other. But this staredown I didn’t see any fire in him,” he says.
The story of their 2010 fight is well known. It ended in the second round when Hari was disqualified for kicking Gerges in the face after knocking him down. Fans have wanted to see a rematch every since.
So has Gerges.
“I waited a long time for this. I was on the way to winning the fight in 2010. He had a good first round, I came back strong in the second round and then when I went down he kicked me in the face while I was on the floor and got disqualified,”
“Since then people acted like he was the winner because he won the first round but the fight was not near over. That makes me angry because I know what I felt and he knows what he felt, before that moment, and so I know he is not really confident.
“He will have to go through hell this Saturday. Hell. I hope he is ready for the war.”
GLORY 51 ROTTERDAM takes place tomorrow night (Saturday, March 3) at the Ahoy Arena in Rotterdam, Netherlands and airs live in the USA on ESPN and live in the Netherlands on Ziggo Sport.