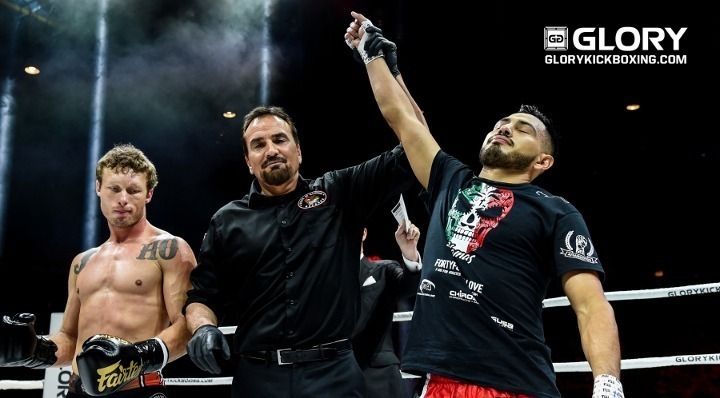 Diego ‘The Terror” Llamas scored a first-round stoppage win on his GLORY debut, taking out four-fight GLORY veteran Justin ‘J-Ho’ Houghton in the first bout of the SuperFight Series card.

The fight was originally scheduled to take place on the undercard but the loss of a SuperFight Series bout several weeks before the event meant that the undercard Headliner got moved up.

The switch was a boon for Llamas as he got to showcase his polished striking skills on a far bigger platform than originally scheduled.

Llamas is based in Dublin, California but is originally from Guadalajara in Mexico. He relocated to Dublin several years ago to train with the CSA team, having been impressed with the quality of their fighters when he saw them fight in his home city.

He has worked extremely hard to get where he is today, with many personal sacrifices along the way.

At one point he was working early morning shifts in a kitchen then cycling across the city to make the first of his two daily training sessions before returning to his rented room, containing only a mattress, for a few hours sleep before returning to the kitchen once again.

Llamas was not under contract to the GLORY organization for his undercard-turned-SuperFight bout, but will surely have caught the matchmakers’ eyes.