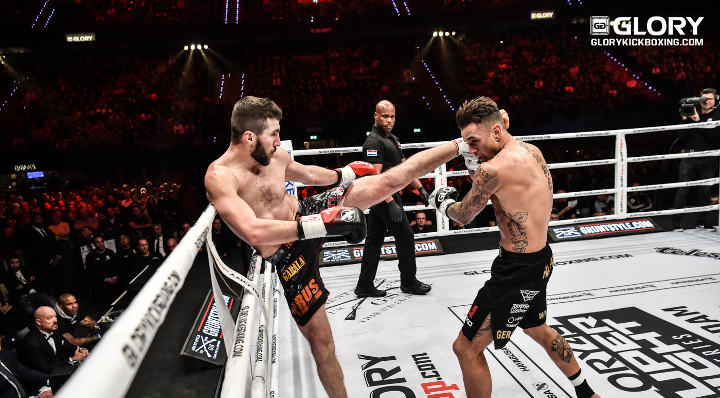 “I respect Nieky Holzken so much. He is one of my icons in the sport, one of the best who ever did it,” said Alim Nabiyev backstage at GLORY 49 after what will surely prove to be the breakout win of his career.
Whatever words could be used to describe the fight itself, ‘respect’ would not be among them. Nabiyev was on the form of his young life and felt so in control of the fight that he felt able to showboat on multiple occasions.
There are few fighters who feel comfortable standing in front of Nieky Holzken and mocking him the way Nabiyev did. The only other who comes to mind is Cedric Doumbe, who was the first GLORY fighter to unseat Holzken from the Welterweight throne.
Going into this fight Holzken was riding a two-fight losing streak, both losses being to Doumbe. The Cameroonian clown-prince uses his antics to antagonize and unsettle all of his opponents, but found his mockery particularly successful in getting under the skin of the proud Holzken.
How much Nabiyev took his cues from Doumbe we don’t know, but there were some echoes of similarity in how he sought to taunt Holzken and how Holkzen reacted.
But Holzken was also frustrated by Nabiyev in other ways. The Azerbaijanian Welterweight has a tricky style, hitting constantly from unusual angles and then stepping and wheeling out of harms’s way to avoid the counter-attack.
Nabiyev clearly dominated the fight, not so much because Holzken had a bad performance but because his own was so good. Occasionally fighters come along with something unique which shakes up their division; Doumbe was one and now Nabiyev is another.
Post-fight he immediately set his sights on current title-holder Murthel Groenhart or, at the very least, a spot in a contender tournament. He’s trying to get on the fast track to a title shot. As for Holzken, he will return to his base in Helmond, southern Holland, and take some time to consider his next move.
Alim Nabiyev def. Nieky Holzken (30-27, 30-27, 29-28, 30-27, 29-28)