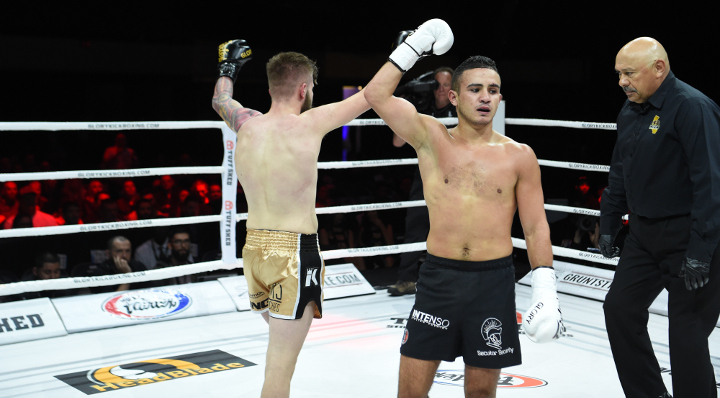 Stellar performance puts Zougarry back in the win column

Zakaria Zougarry (31-4-1, 15 KO’s) put himself back in the win column with a showcase performance against Bailey Sugden (11-1, 2 KO’s) in the second fight of the GLORY 52 LOS ANGELES SuperFight Series card.
It was a key encounter for both fighters: Zougarry immediately appeared to be a prospect on entering the GLORY ranks, but in December his third fight for the organization ended with a knockout loss Petchpanomrung.
Sugden was on that same GLORY 49 card but came away with the win after outworking and outboxing China’s Chenglong Zhang over three rounds.
He entered the ring at GLORY 52 with a 2-0 record in the organization and said that he saw Zougarry, ranked #8, as his passport to the upper levels of the top ten.
Sugden said that he considered Zougarry to be “chinny” and open to being stopped. He predicted a knockout win for himself. But it wasn’t to be - Zougarry’s timing and distance frustrated Sugden’s efforts to get the fight in the range he wanted it.
Solid kick work from Zougarry early in the fight set the tone, with Sugden’s rhythm being disrupted. That disruption continued throughout the following rounds as Zougarry variously ducked, dodged and evaded much of Sugden’s output.
There were some successes for Sugden, as evidenced by the deep cut he opened over Zougarry’s left eye around the middle of the fight, but there were long spells in frustration for him as he found himself being hit by the darting Zougarry without being able to respond as he wanted.
Zougarry’s evasiveness is something special to witness when he is on form, especially when one considers the speed and precision of a boxing-based striker like Sugden.
Some trash talk had preceded the bout from Sugden’s side but there was only one moment of controversy in the fight itself. Sugden went to the canvas in the third round and bounced up again but the referee called it a knockdown, much to the young Briton’s dismay.
The call meant that the round would be a 10-8 in Zougarry’s favor. Fortunately it didn’t prove to be a decisive element of the fight; Zougarry was already ahead on the scorecards and the knockdwn merely served to distort the final scoreline.
Zakaria Zougarry def. Bailey Sugden (30-26, 30-26, 30-26, 30-26, 30-26)