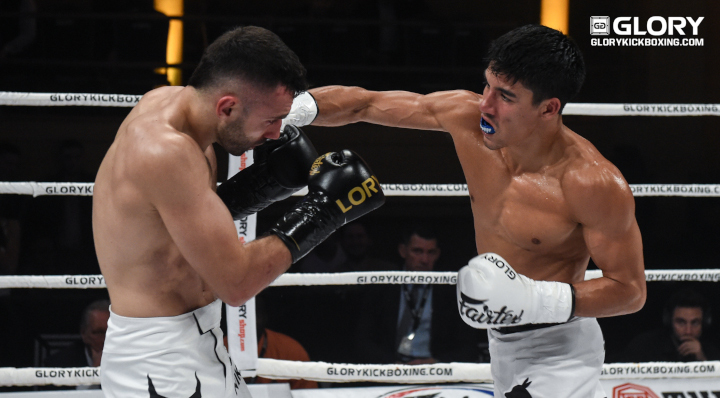 Ten Pow tried to counter with step-in knees, but Tsigaras refused to give him space. Backed into a corner, Ten Pow delivered a big uppercut and then a left hook to create distance.

A wheel kick attempt from Ten Pow was blocked by Tsigaras. He followed it with a flying knee, but Tsigaras wore it well as the round concluded.

Round two began with Ten Pow returning to the well, throwing a flying knee and a spinning back kick. Tsigaras was patient and avoided damage from the flashy attacks.

Ten Pow increased his punching volume, cracking Tsigaras in the liver and the head. Tsigaras tried to fire back, but absorbed another heavy body shot and a punch that snapped his head back.

Tsigaras’ toughness was put to the test, but he passed..

A jumping switch kick was the first significant technique of the final stanza. Tsigaras walked forward, but failed to throw strikes.

Ten Pow bombarded him with punches whenever he got in range. A spinning backfist from Ten Pow glanced off the glove of Tsigaras midway through the round. Low kick after low kick found a home in fight’s final minute as Ten Pow remained active until the final bell.

There were no surprises when the scorecards were read, as Ten Pow kept his unbeaten GLORY record intact.