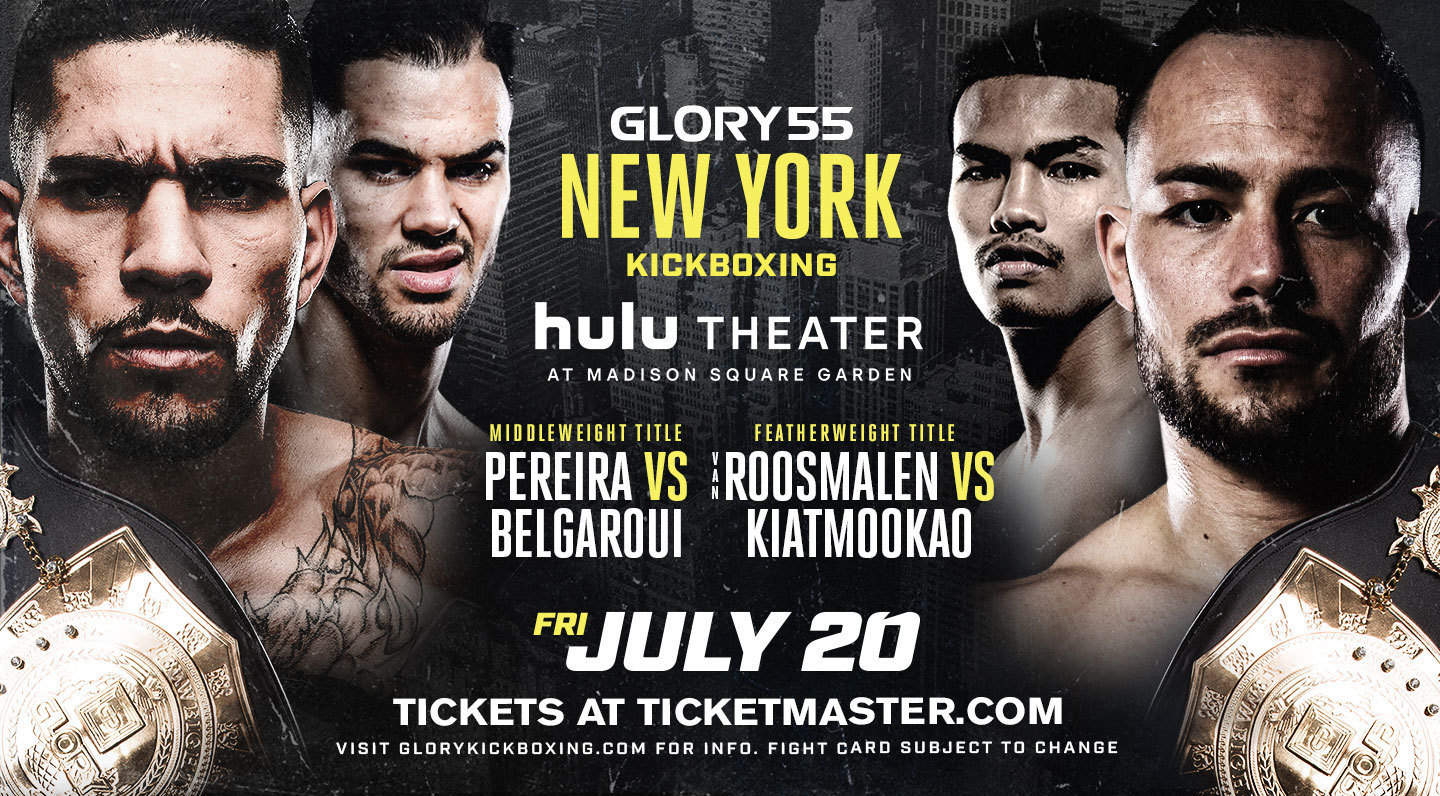 At GLORY 55 New York, one of the top pound-for-pound fighters in the world makes his record 20th walk to the GLORY ring. In the first of two thrilling world title bouts on the card, undisputed Featherweight champion Robin "Poker Face" van Roosmalen (40-7, 21 KO, fighting out of the Netherlands) looks to add another title defense to his legendary resume that already includes championship reigns at both Featherweight and Lightweight – making him the only GLORY fighter to accomplish the feat.

Standing in the way of history for Van Roosmalen is a familiar challenger, as 22-year-old "The Professor" Petchpanomrung Kiatmookao (159-36-2, 27 KO, fighting out of Thailand) gets his second opportunity to dethrone the Featherweight king and capture GLORY gold.

The foes squared off at GLORY 41 SuperFight Series last May, with Van Roosmalen earning the nod via majority decision. In the time since, the Dutch champion has continued his dominance, defeating top contender Serhii Adamchuk and interim Featherweight champion Kevin VanNostrand. Petchpanomrung, more commonly referred to as "Petch," went on a winning streak of his own, reeling off three in a row. Two of those three victories came by way of head kick, including a 2017 Knockout of the Year contender against Zakaria Zouggary in December, and what's sure to be a Knockout of the Year nominee for 2018, submitted earlier this month against Abdellah Ezbiri.

Pereira and Belgaroui have already battled twice, with both bouts taking place during 2017. In their first meeting last April, Belgaroui felled the Brazilian boxer Pereira en route to his contender tournament victory at GLORY 40 Copenhagen. They next met in December at GLORY 49 SuperFight Series, where Pereira – now champion after defeating Simon Marcus – cut the 25-year-old challenger Belgaroui with a knee, forcing a doctor's stoppage and setting up this rubber match in the Big Apple.

Additional bouts for GLORY 55 New York, as well as GLORY 55 SuperFight Series and the GLORY 55 prelims, will be announced in the coming weeks.

Tickets for GLORY 55 New York and GLORY 55 SuperFight Series go on sale to the public at 10 a.m. ET on Monday, May 28 and will be available for purchase at ticketmaster.com or the Madison Square Garden box office.

Starting today, fans that register (or have previously registered) at GLORYkickboxing.com will have an opportunity to purchase tickets for GLORY 55 New York and GLORY 55 SuperFight Series three days before tickets go on sale to the general public. The exclusive pre-sale begins at 10 a.m. ET on Friday, May 25. Those that register will receive an email before Friday's pre-sale with instructions on how to access this exclusive event.