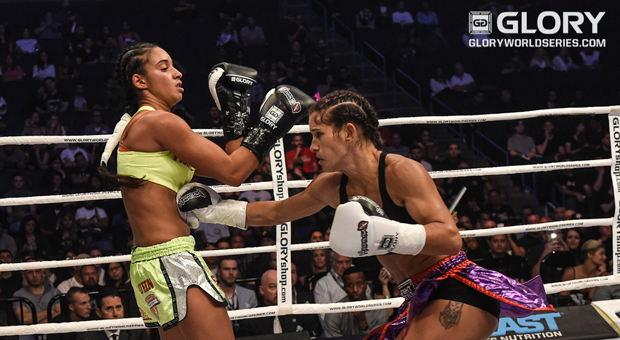 Anticipation was high for “Timebomb” Tiffany van Soest's GLORY debut and she did not disappoint, showcasing her top-flight skills in what was both the inaugural GLORY women's fight and the first fight of the newly-announced women's Super-Bantamweight Grand Prix.

Van Soest found herself facing the 18-year-old Esma Hasshass, of Morocco by way of the Netherlands. The teenage 'Fight Queen' stepped up to face Van Soest after numerous other opponents pulled out or turned the opportunity down. GLORY matchmakers described getting an opponent for Van Soest as “a nightmare” after several such pull outs.

Hasshass took the opportunity with both hands though and while she was unable to overcome her bigger-name opponent, she made a spirited effort and left with her stock higher than it was. People who saw the fight will tune in to watch her again.

The big winner was Van Soest though. She showed everyone exactly what all the hype was about with a slick display of skill, setups and reflexes. Van Soest lost out on a stoppage win only through the sheer toughness and heart of Hasshass, who was able to get up and carry on after a beautifully set up right hand from Van Soest in the first round.

In the second and third rounds Hasshass found herself outgunned if not outclassed, but managed to stave off being completely overwhelmed. She kept up offense and counter-attacks whenever she could, but Van Soest was all over her and when she was not hitting she was changing angle, disrupting Hasshass and keeping her on the back foot.

After three rounds the judges returned a decision of 30-26 on all three cards, the first round being a 10-8 for Van Soest because of the knockdown. She now proceeds to the semi-final of the Grand Prix tournament which will be playing out over the next few events.

“She's tough. She is the only one who stepped up and came in and took the fight. She got knocked down and got back up and fought her heart out so, much respect to her,” Van Soest said afterwards.

“I feel comfortable in here, I feel great. What the future holds? Me wearing one of those big shiny belts.”