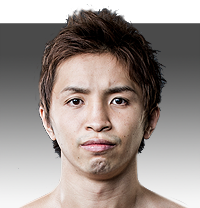 ‘The Smiling Sniper’ Yuta Kubo made his GLORY debut in May 2013 by winning the eight-man featherweight slam tournament at GLORY 8 TOKYO. Along the way he beat three of the world’s top talents at this weight and stamped his authority on the number one ranking spot.

Kubo had previously fought at and dominated the 67kg weight class and has even ventured as high as lightweight (70kg), with success in each division. He combines a highly-technical fighting style with a killer instinct.

He is also an experienced tournament fighter, having won several eight-man tournaments in his native Japan prior to being signed by GLORY. Having made his professional debut aged 17, Kubo has fought and beaten all his closest rivals at least once.

Kubo started practicing taekwondo at the age of 8 and kickboxing at the age of 15. He won the ‘Best Rookie’ award from the New Japan Kickboxing Federation in 2005, the year he turned professional, and has scooped numerous titles and awards since then.