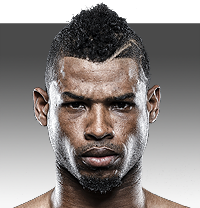 Explosive and unorthodox, Andy Ristie is one of the most dynamic fighters in kickboxing today.
With power in everything he throws, ‘The Machine’ is capable of scoring a knockout at any moment of the fight.
A late starter in kickboxing - he didn’t begin training until his mid-20’s - Ristie’s rise through the ranks has been a steady one.
He was tipped as one to watch when he signed with GLORY and that advice proved to be correct - Ristie went on a four-fight winning run before entering the GLORY 12 NEW YORK Lightweight Championship Tournament.
In the semi-finals he faced Giorgio Petrosyan, who went into the fight with a 78-1-1 record and who had never even been cleanly knocked down, much less knocked out.
Ristie threw Petrosyan’s timing off with his unorthodox style then landed a knockout blow to score one of the biggest upsets in kickboxing history.
He wasn’t done there.
In the final he faced Robin Van Roosmalen, ranked #1 in the world at the time, and was able to repeat the feat.
Van Roosmalen is not easy to put pressure on but Ristie backed him up before taking him out with a killer left uppercut to win the tournament and the $150,000 prize.
The win blasted Ristie into the upper echelon of kickboxing’s lightweight stars. Ristie has arrived at the top, and he intends to stay there.