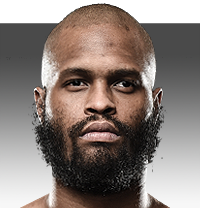 Maurice Greene - otherwise known as ‘Moe the Pirate’ - was raised in New York, where he wrestled in high school, before moving to his current home city of Chicago, Illinois.

The big-hitting heavyweight first focused on MMA, turning professional in 2012, but found that his love of the striking game led him first into professional kickboxing and then into the GLORY ranks.

At 6’9” Greene is a tall and powerful man, but from his first day in the sport he has focused on technique. He says that former world champion Muay Thai stylist Anderson ‘The Spider’ Silva, noted for his technicality, is his fighting icon and the martial artist he most tries to emulate because “nobody moves like him”.

Greene brings a strong work ethic to the training room and says that his personal motto is ‘Work hard, F- luck’ because “You don’t get to the top being lucky… Maybe sometimes. But luck won’t keep you up there. You need to work hard.”

In 2012 Greene was still in the process of making a name for himself, having only just turned professional, when he was brought in by Pat ‘HD’ Barry to help him prepare for a UFC fight with Stefan Struve. In a sign of just how far he has come, he now stands alongside Barry as a GLORY heavyweight in his own right.