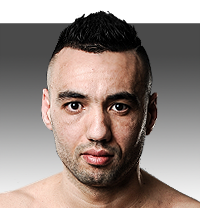 Samir fights out of Hemmers Gym, a pretty famous stable. It is in the south of Holland and was the home of Ramon ‘The Diamond’ Dekkers, the fighting icon who really pioneered the European breakthrough into Muay Thai success in Thailand and internationally.

Prior to joining Hemmers Gym he was with Jan Pasterjijk, a very well respected trainer who also used to train Saki for the first part of his career.

Samir is Dutch-Moroccan and like many of his Dutch-Moroccan peers he grew up in a hard area surrounded by all kind of temptations and possibilities to stray from the path. He found direction and discipline in kickboxing and he wants to pass that on to the youths.

He is also probably one of the nicest guys in the entire sport.

"I want to show the youth that there is more than hang around on the streets and get involved in stuff. Just by getting involved in sports you can change your life,” he says.