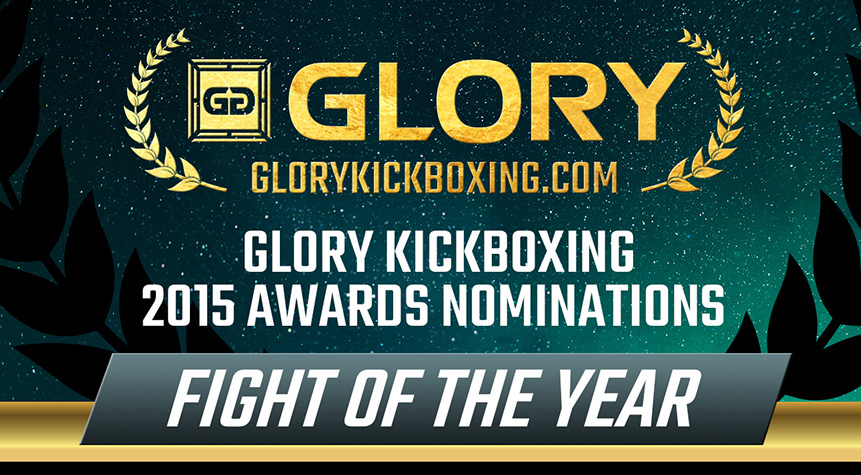 2015 Awards Nominations - Fight of the Year

Competition for a spot on the 'Fight of the Year' shortlist was again intense, as it is every year. GLORY Kickboxing bouts are generally action-packed and that can make it difficult to select the final nominees - there are just so many to choose from.

This year GLORY is using shortlists of just four entries in order to simplify the voting for fans, and that made the selection process even harder. The final four nominations were arrived at by an internal panel and each of them is a worthy contender for Fight of the Year 2015.

GLORY's final fight of 2015 more than lived up to expectations. Groenhart put on a career-best performance and, after a typically restrained start, Holzken was forced to dig deep into his box of tricks to catch up and eventually win a decision.

The result was not without controversy and could easily have gone either way, with Groenhart landing more strikes overall and Holzken landing more power-shots.

There was a lot of heat between the two in the build-up to the fight and while Holzken declared the rivalry to be over afterwards, do not be surprised to see him and Groenhart face each other again in 2016 if the latter can maintain this kind of form.

The vacant World Featherweight Championship was up for grabs when GLORY visited the Middle East for the first time. Varga and Amrani had earned the right to be the first challengers for the belt and both of them wanted it badly. The fight reflected that, a five-round war in which they left everything they had in the ring. Varga's superb conditioning brought him into the lead in the later rounds and eventually won him a decision, but Amrani fought him every step of the way.

The penultimate SuperFight Series card of the year brought two of the world's top light-Heavyweights into close contact. Vakhitov has looked exceptional since making his GLORY debut and quickly marked himself out as a contender while Ilunga is the divisions former #1 and wants to get back up there.

What made this fight interesting was that both of them came into it off the back off a loss in their previous outings. Whoever lost this one would step outside the immediate contender conversation and would need to rack up a few wins to get back into it. Neither wanted to risk that and so they went all-out to secure the win which would keep them in title contention.

Schilling was originally set to challenge Middleweight champion Artem Levin in Denver but when the Russian pulled out, Wilnis stepped in on a few weeks' notice to take his place. If he could beat Schilling, he could take a big leap up the rankings and put his own name into that contender picture.

Of course Schilling had no intention of allowing himself to be leapfrogged in that way and so the stage was set for an aggressive encounter – and that was before factoring in both men's famously forward-pressure styles.

That's the final four in the shortlist for Fight of the Year but lots of others were mentioned in the long-list stage. These included Josh Jauncey's fight with Giorgio Petrosyan in Milan (GLORY 25) and Nieky Holzken's second encounter with Raymond Daniels (GLORY 23 LAS VEGAS). Year on year GLORY delivers outstanding action and 2015 was no exception.

Cast your vote in the comments section below or via our Twitter and Facebook pages. Winners will be announced at the end of the year.