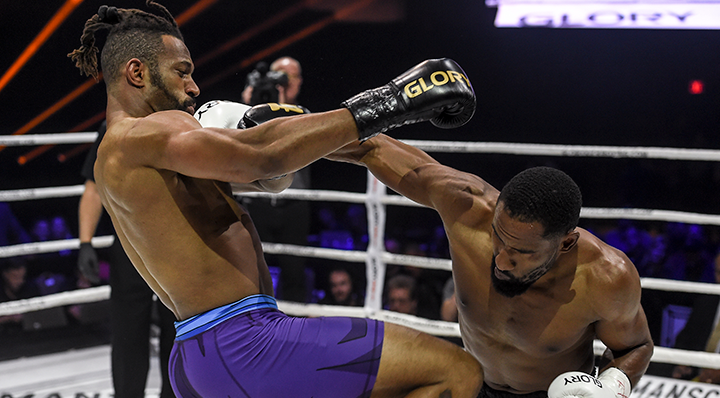 Boyd proves to be too much for Rodriguez in Welterweight clash

A pair of American Welterweights locked horns on the GLORY 68 SuperFight Series as Omari Boyd (14-2, 1 KO) took on Charles Rodriguez (9-2, 4 KO’s) in Miami.

Boyd attacked early with body kicks. Rodriguez was undeterred and came forward with punches. The low kicks of Rodriguez chopped at the lead leg of Boyd. The punches of Boyd found their way through the high guard of Rodriguez.

He answered with knees from the clinch to re-establish his range. A Boyd high kick was barely blocked by Rodriguez. The low kicks of Rodriguez continued land as the round expired.

The forward advance of Rodriguez continued in round two. Boyd kept a high guard and looked to counter. After numerous exchanges, a vicious left hook from Boyd caught Rodriguez flush on the temple. He crashed to the canvas and the referee gave him a count.

Rodriguez was able to continue, but did not look the same over the round’s final minute.

Boyd came out aggressively in round three, but it nearly cost him as Rodriguez landed a high kick. Boyd was able to stay upright and fired back with punches. A right hand from Boyd sent the mouthpiece of Rodriguez flying.

A trip from Rodriguez resulted in a pause to the action as the referee warned him for the illegal technique. When the fight continued, Boyd landed a devastating body shot. Rodriguez winced, but kept his pressure until the fight’s final bell.

With the second-round knockdown and cleaner strikes throughout, the decision was never in doubt as Boyd took home the win.