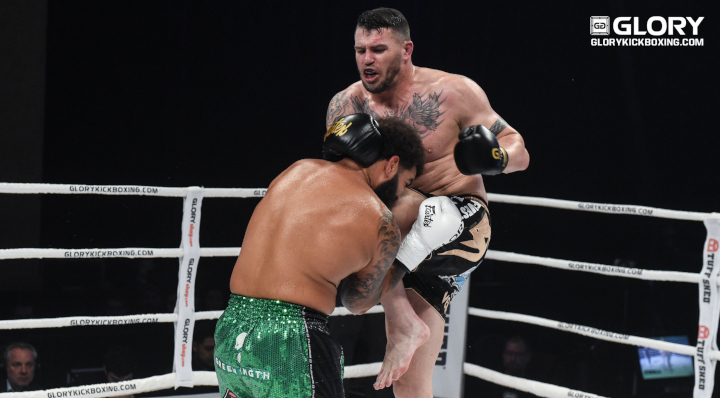 A light Heavyweight grudge match between Americans Chris Camozzi (3-1, 2 KO’s) and Myron Dennis (21-8, 10 KO’s) was featured on the GLORY 61 Main Card in New York. The pair were both a part of GLORY 56 in Denver and Dennis was quick to call out the UFC veteran Camozzi following their victories in the Mile High City.

Camozzi scored with a low kick early, but Dennis answered with a head kick. Camozzi was unfazed by the attack and came forward with punches. Dennis used a high guard to block the punches of Colorado’s Camozzi.

A crescent kick from Camozzi drew oohs and ahs from the New York crowd, but it missed its mark. The low kicks from Camozzi landed with more regularity as the round progressed. Dennis delivered a right hand, prompting Camozzi to switch levels and attack the body.

The low kicks of Camozzi were again the story early in the second stanza. Dennis sought openings, but appeared to struggle with the south paw stance of Camozzi. Camozzi threw a spinning kick to the thigh of Dennis and followed it with a spinning backfist that glanced off the gloves of Dennis.

A counter left hand from Dennis landed as Camozzi left his jaw exposed. The volume of Camozzi was a factor as he changed levels and fired combinations. A late knee from Camozzi put a punctuation mark on the round.

Dennis attacked with two straight head kicks to open the final frame. Camozzi was consistent with his attack, delivering punch combinations. The high guard of Dennis worked against him, as it opened up his midsection for punches and allowed Camozzi to score with knees from the clinch.

Camozzi was able to back Dennis to the ropes and pepper him with strikes as Dennis began to fade. A deep breath from Dennis was met by another spinning backfist attempt from Camozzi in the fight’s final seconds.

“You have to be humble in victory and defeat, but I’m not an easy fight for anybody,” said Camozzi after his victory. “This is still new to me and every fight I’m getting better and better. I love it here in GLORY. I’m having a blast.”