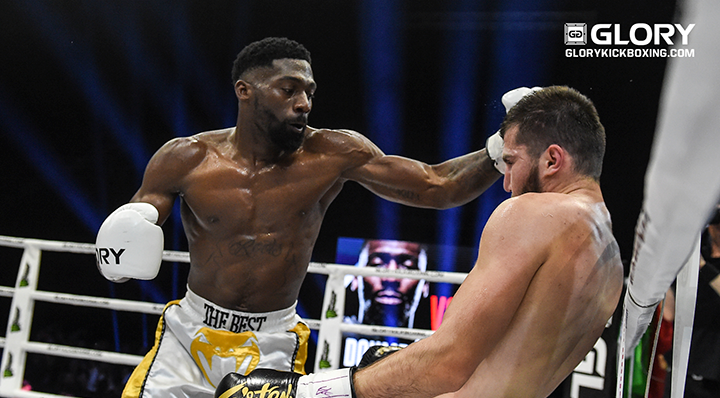 The pair met previously at GLORY 51, with Nabiyev claiming victory by split decision. Doumbé recaptured the belt with a second-round finish of Harut Grigorian in March to set up the rematch.

Doumbé quickly closed the distance, forcing Nabiyev to throw a knee and switch his stance. Doumbé cracked the challenger with a straight left.

Nabiyev clinched with Doumbé and punched in the back of the head multiple times. The referee paused the action and warned Nabiyev for the infraction. A right hand from Doumbé sent Nabiyev reeling to the ropes. The overhand right of the champion found its mark, but Nabiyev countered with a series of knees and a right hand of his own.

Nabiyev scored with a spinning backfist early in round two. Doumbé flicked his jab to keep range, frustrating Nabiyev. A massive left hand from Doumbé rocked Nabiyev. He smelled blood and continued to press forward. Nabiyev stayed on his feet, but was clearly wobbled from the onslaught.

A counter overhand right from Doumbé sent Nabiyev crashing to the mat. He beat the count, but it was only for a moment as Doumbé landed another right hand and sent an unconscious Nabiyev to the mat.

The victorious Doumbé sprinted to the crowd to celebrate with his family.

“I want to thank my cornermen. Without them, I cannot win a fight like that,” said the champion. “Listen, I said last time I was only at 20 percent. This time I trained like a professional fighter and I said I would knock him out. I was ready to go five rounds. I am the best Welterweight in GLORY, ever.”