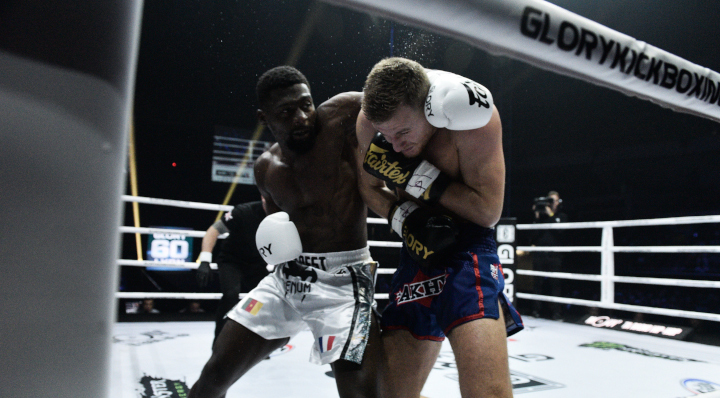 Doumbé too much for Vienot in headlining affair

Doumbé was originally slated to challenge current titleholder Harut Grigorian, but the champion withdrew during fight week due to acute gastroenteritis. As such, Vienot stepped up on short notice to square off with the former king of the division.

The southpaw Vienot opened with a high kick, but Doumbé blocked it. Doumbé quickly opened up with his boxing, dropping Vienot with a left hand. Vienot recovered and looked to fire back. Doumbé was reckless with his punches, allowing Vienot to land a big knee that wobbled the former titleholder.

Vienot tossed Doumbé to the canvas and the referee warned him for the illegal technique. A massive right hand from Doumbé clipped Vienot as the round expired, but he was able to stay upright.

Doumbé dumped Vienot early in round two and the referee again delivered a warning. Doumbé countered Vienot’s kicks with more looping punches. Vienot scored with a kick to the body of Doumbé, then tried to go upstairs with a head kick.

A knee from Vienot just missed the chin of Doumbé, but a left hand found its mark. Doumbé answered with more right hands at the end of the round.

A heavy right from Doumbé cracked Vienot to begin round three. He followed it with yet another, which dropped Vienot for a second time. The referee warned Vienot for holding, as he tried to recover from the heavy shot.

A head kick from Doumbé landed, but Vienot caught the leg and dumped him to the canvas. The referee paused the action and deducted a point from Vienot after the repeated warnings. A stiff right hand from Doumbé popped the head of Vienot, but he was able to stay on his feet as the fight came to an end.

“What can I say? Jimmy put on a great performance,” said Doumbé of his last-minute opponent. “I was really aggressive and I wanted to get the KO. He’s really tough and brought a good game tonight.”

On the champion Harut Grigorian, “Harut… Harut… where is Harut? Oh, right, he’s scared. Any time, any place, I will be there. If you [pull out] again, I will be there until I get my belt back.”