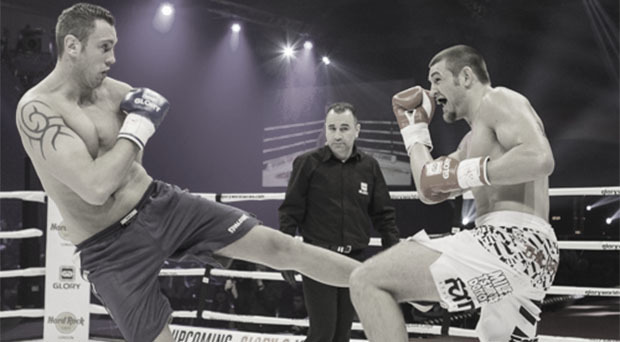 Duut: “I’ll give Jurkovic a bad start to his LHW career”

Michael Duut made a strong start to 2013, stopping Dustin Jacoby at GLORY 5 LONDON and beating Steve McKinnon at GLORY 7 MILAN.

He entered the GLORY 9 NEW YORK light-Heavyweight tournament and almost scored the upset of the year by nearly knocking Tyrone Spong out. The fight instead became a contender for Comeback of the Year as Spong rose from the canvas to knock Duut out with his very next punch.

Duut (38-5, 17 KO’s) then faced Danyo Ilunga (54-5, 41 KO’s), ranked #2 in the world, at GLORY 11 CHICAGO, and suffered a TKO loss when a ligament in his arm suddenly snapped. It wasn’t clear what caused the injury but Duut’s pain was evident and his arm was immobilized, ending the fight.

Now fully healed, he looks to bounce back at GLORY 14 ZAGREB on Saturday, March 8 with a fight against local man Igor Jurkovic (47-7, 29 KO’s). The Croatian fought at Heavyweight until now but, small for that weight-class, is now making his light-Heavyweight debut. It is a path that Duut himself has trodden.

“When GLORY came around, light-Heavyweight became opened up as a serious weight class and so I decided to drop down,” he says.

“He wasn’t a big Heavyweight so it is a smart idea for him to move down. The only bad thing for him is he is facing me first so he isn’t going to get off to a good start at his new weight.”

Duut is confident of scoring a finish. So is Jurkovic. In a recent interview he said he would leave Duut on the canvas. Duut hasn’t seen the comments.

“I don’t care what he said. I don’t want to read it.  I know he’s a southpaw and he’s a good fighter. I don’t know a lot more than that about him but I respect every opponent,” he snaps.

“Training is going really good right now. I had a good Christmas with the family. I am in Meijiro twice a day doing my pads and my strength work, sparring and everything. I am ready for this fight.”

To this day Duut does not know what happened to his arm against Ilunga. He puts it down to a freak accident, though he jokingly suggests Ilunga might have been doing some extra work in the back room to make it happen.

“Normally you get some injury and you can fight through it but this was like somebody put a knife in my arm, it was crazy,” he says.

“I think the guy must do voodoo or something - when Bouzidi fought him, something happened to his shoulder and when Verlinden fought him he broke his hand. So he must be doing something, haha!

“But I don’t really think that counts as a win for him…. Ah I really don’t want to talk about it. I will see him again and I will make up for it.”

An Ilunga rematch is one of Duut’s hopes for this year. What are his other plans for the 2014 season?

“I’m going to win everything!” he says. “I want to fight five times this year, four times at least but hopefully five, and I am going to beat everybody put in front of me - starting with Jurkovic.”

GLORY 14 ZAGREB takes place at Arena Zagreb in Zagreb, Croatia on Saturday, March 8. The Headline fight sees local hero Mirko ‘CroCop’ Filipovic take on Remy Bonjasky.In the co-Headline fight, Andy ‘The Machine’ Ristie faces America’s Ky Hollenbeck with the GLORY Lightweight Championship Title on the line.The event airs on SPIKE TV in the US, The Fight Network in Canada, BT Sport in the UK and over 150 territories worldwide. Check local listings for broadcast times and details.