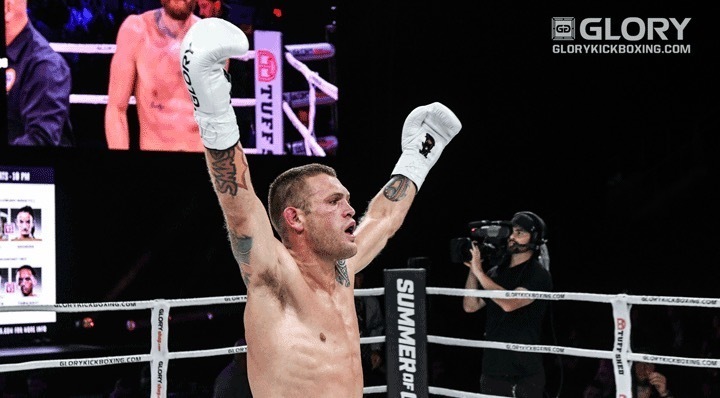 The world’s premier stand-up combat promotion returned to the 1stBank Center in Broomfield, Colo., on Friday, Aug. 10, for GLORY 56: Denver.

Nelson used a jumping hook and low kick to get inside the longer McGuinness. McGuinness looked to switch stances, but Nelson’s low kicks still found their mark.

Nelson’s volume was the story early in round two, as McGuinness looked to counter.

A stiff right hand from Nelson earned a knockdown as the round expired and his footwork and speed advantage of Nelson were obvious in the last round. He stayed a step ahead of McGuinness, scoring with combinations throughout.

Unsurprisingly, when the judges were called upon for a verdict, it was Nelson’s fight.

Diagne’s punches found their mark with more regularity in the middle stanza, but Choice continued to push the pace.

Diagne opened the final frame with a big body kick. Choice responded with a big flurry in the corner, but Diagne took the shots well. The fight went the distance with Choice earning the split-decision victory.

The action continued with Featherweights Ben Acosta (2-0) and Houssam el Kasri (0-1). Acosta came out firing with spinning attacks to navigate the reach of el Kasri.

That proved to be futile as El Kasri used his reach and power to overwhelm Acosta. First, he delivered a heavy knee in the corner and earned his first knockdown with punches just moments later. Acosta tried to recover, but el Kasri met him with a series of push kicks to earn his second knockdown.

In the first bout of the evening, Justin Moss (3-1, 2 KO) met Charles Rodriguez (7-0, 4 KO) in a Welterweight affair. Moss threw with volume early, landing with punches and kicks to the body.

Rodriguez’s power began to wear on Moss as the fight progressed. Late in the first round, Rodriguez delivered a heavy kick to the calf of Moss and earned a knockdown.

The low kicks continued from Rodriguez in round two, forcing Moss to fight southpaw and absorb further punishment. Moss showed heart, firing back with uppercuts in the final round and even wobbling Rodriguez in the waning moments of the fight.

It was too little, too late however, as Rodriguez swept the scorecards.