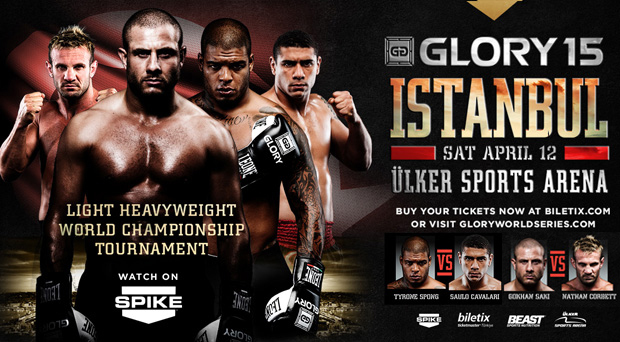 Turkish knockout artist Gokhan 'The Rebel' Saki (79-16-0, 56 KOs) will make his Light Heavyweight debut at GLORY 15 ISTANBUL when he faces Australia's Nathan 'Carnage' Corbett (57-4-0, 45 KOs) to form one half of GLORY's Light Heavyweight World Championship Tournament. On the other side of the bracket, #1 ranked Tyrone 'King of the ring' Spong (90-5-0, 60 KOs), who has not been defeated since 2011, takes on young and hungry Saulo ‘Cassius Clay’ Cavalari (28-2-0, 18 KOs), currently ranked #3 at Light Heavyweight.

Tickets for GLORY 15 ISTANBUL are on sale now: buy HERE