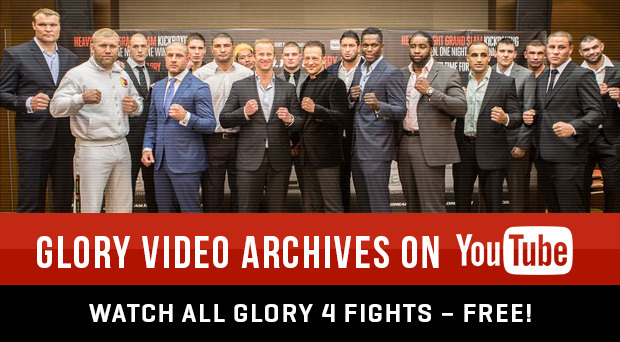 The GLORY 4 TOKYO event on New Year’s Eve 2012 was big in all senses of the word.

It took place at the Saitama Super Arena in Tokyo, Japan and featured sixteen huge Heavyweights battling it out in a one-night ‘Grand Slam’ tournament.

The tournament featured an epic line-up: all the world’s top Heavyweights at the time were assembled in one place. On the line was a $400,000 grand prize.

Special rules were in place to minimize the chance of injury derailing winners as they progressed through the tournament. Up until the grand final, a fighter who won two consecutive rounds would be declared the winner, dispensing with the third round and reducing unnecessary damage.

As you would expect, the tournament produced a lot of finishes. Of the fifteen bouts that night, eight ended inside the distance via KO or TKO, a finish rate, which few other combat sports leagues come close to.

GLORY is in the process of unlocking its entire fight archive and making it available to fans around the world for free. The process started with GLORY 1 STOCKHOLM and has seen one event per week unlocked, which will continue up to and including the GLORY 17 LOS ANGELES event, which took place in June.