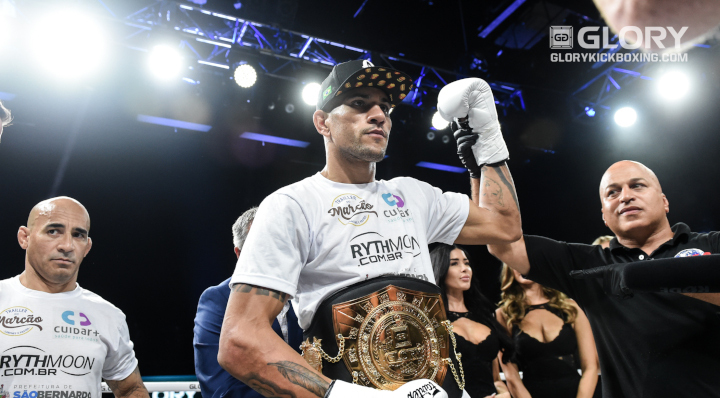 Alex ‘Po Atan’ Pereira (29-6, 17 KO’s) first crossed paths with Jason ‘Psycho’ Wilnis back in 2012, when the ‘It’s Showtime’ organization visited Pereira’s home city of Sao Paulo, Brazil to stage an event.
On that occasion, Pereira fell victim to Wilnis’ low kick, being forced to retire at the end of the second round due to the damage accumulated to his left leg.
Three years later they met in the Middle East for a showdown in the semi-finals of the GLORY 20 DUBAI Middleweight Contender Tournament. Here again Wilnis (31-9-1, 9 KO’s) came away the victory, taking a unanimous decision on the scorecards.
Wilnis seemed set for big things, a prediction lent weight by his subsequently becoming Middleweight champion in mid-2016. But his tenure was brief: he lost the belt back to Simon Marcus nine months later.
Marcus then took a hammering from Pereira at GLORY 46 CHINA and the Middleweight title passed to the Brazilian, who has since defended it three times. He will rematch Wilnis at GLORY 65 UTRECHT on Friday, May 17 in what will be their trilogy fight.
“I’m not really into the ‘payback’ stuff. For me it’s just another title defense and a new chapter in the story. Payback is something that provides an indirect motivation at some point, sure, but revenge is not my main goal,” says Pereira.
“Forget everything that has passed between us, especially that first fight. I don’t want to belittle his achievements but at that time I was really still a rookie. I was primarily a boxer and had no idea how to defend against low kicks.

“Our second fight though, I was very well trained. I was going for strong combos plus spinning kicks, knees, jumping knees - everything the GLORY rules value. There was a knockdown on each side. It was a great fight. I thought I won, the judges did not. Oh well - it's part of the sport.
“Now we will go for part three. These days, it’s practically impossible for him to hurt me the way he did in our first fight. Look at my recent fights to see how solid my tactics and techniques are.”
Seven years on from that first meeting, Pereira looks at his own development and sees a steady evolution. But he does not see the same in Wilnis.
“After all these years, he showed some evolution but basically he still does things the same way. Wilnis uses the traditional Dutch kickboxing style. It’s good but it is very formulaic. Here in Brazil we have some elements of this style but our game is more loose,” he says.
“I tried to change in every fight since then, adapt to my opponents in the best possible way, whether by set of techniques or stance, anything necessary.”
Pereira’s adaptations since 2012 appear to include a marked propensity for knocking people out. Most recently, his GLORY 55 NEW YORK stoppage of Yousri Belgaroui was nominated for ‘Knockout of the Year 2018’ by GLORY fans. Does he see himself delivering the same to Wilnis?
“I look for the knockout in all my fights but I don’t enter the ring focused on it. It’s just a matter of seizing opportunities,” he shrugs.
“By points or knockout, my mission is to make my fellow Brazilians happy and maintain my legacy. Wait and see what I do.”
GLORY 65 UTRECHT takes place Friday, May 17 at Central Studios, Utrecht, Netherlands.
Two world title fights Headline the card, with further bouts to be announced Wednesday this week.
A limited number of tickets for GLORY 65 UTRECHT remain - click here to buy tickets.