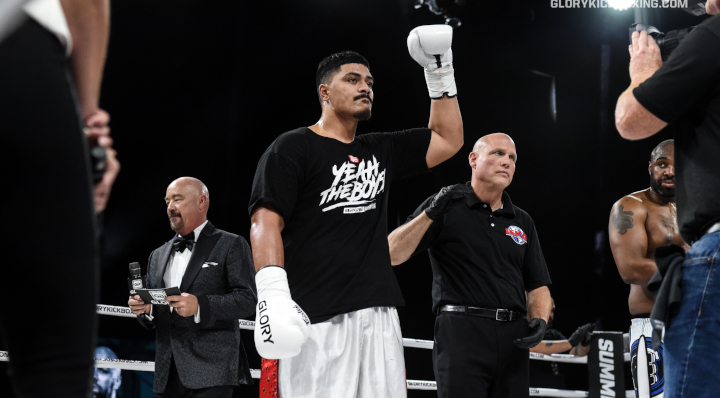 Australian-Samoan Heavyweight Junior Tafa (19-4, 15 KO’s) will head to the Netherlands next month for a showdown with Cihad Kepenek (11-4) at GLORY 65 UTRECHT.
It will be Tafa’s first GLORY fight of 2019 and the first fight of a new multi-year deal he has signed with the organization.
Tafa, who shares a Samoan heritage background with his mentor Mark Hunt, has quickly become a fan favorite in his six fights for GLORY.
In six appearances he has gone 3-3 and only once has he heard the final bell - all three of his wins have been by stoppage in the first round and two of his three losses have also been inside the distance.
Tafa’s second-ever fight in GLORY was against Guto Inocente, a veteran of the UFC as well as GLORY, and was the only occasion he has been the distance.
Despite losing a decision in that fight, a semi-final bout of the GLORY 50 CHICAGO Heavyweight Contender Tournament, he was called back to fight in the final due to Inocente being too injured to continue.
In the tournament final Tafa faced Benjamin Adegbuyi, ranked #1 in the contender lists, and suffered from the Romanian’s heavy legs before eventually falling prey to them in the second round.
GLORY 65 will be Kepenek’s second fight for GLORY following a loss to Tomas Mozny in the GLORY 29 COPENHAGEN Heavyweight Contender Tournament.
GLORY 65 UTRECHT takes place Friday, May 17 at Central Studios, Utrecht.
The unique venue makes this GLORY’s most exclusive event ever. Tickets are in limited supply and total sell-out is expected very soon. Click here to secure tickets.