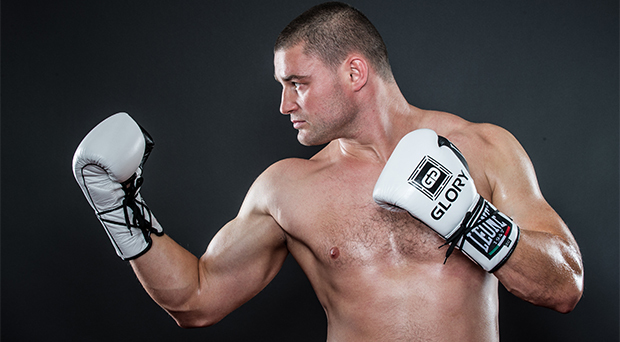 Fresh off his KO win over Michael Duut in March, Croatia’s Igor Jurkovic (48-7, 30 KO’s) has his second light-Heavyweight outing ahead of him this Saturday May 3.

He faces Artem Vakhitov (10-4, 6 KO’s) on the GLORY SuperFight Series 16 card, which takes place immediately prior to the GLORY 16 DENVER card.

Russian export Vakhitov fights out of the same gym as world #1 Middleweight Artem Levin and shares some of Levin’s stylistic trickiness.

An exemplary amateur career led Vakhitov into the professional ranks and his GLORY debut couldn’t have been any better: he stopped Luis Tavares with a trademark body shot in the first round.

“I think that our boxing skills are about equal, but I think I am a better kicker and I have more power. I think he is experienced at amateur but not so much at professional, and that does make a difference,” Jurkovic muses over a light breakfast during fight week’s Thursday morning.

“I also think I have a reach advantage. He like to use the body shot but I think if I use my reach properly I can keep him away from me and I won’t let him into that range.”

Over the past year the light-Heavyweight division (209lbs/95kilos) has gone from a sparsely populated backwater to a churning shark-tank of a division as numerous smaller Heavyweights have dropped down to fight at their more natural weight.

Michael Duut and Tyrone Spong made the move last year. Gokhan Saki and Jurkovic followed this year. Jurkovic’s debut at his new weight came at GLORY 14 ZAGREB in March, where he was able to starch Duut (38-6, 17 KO’s) in the first round.

“It was a great feeling to win by KO in my home city of Zagreb, of course,” Jurkovic says, smiling broadly at the memory.

“I was expecting a much tougher fight with Duut , I though the first round we would be taking a look at each other and then I planned to get aggressive in the second.

“But then we got into some exchanges. He threw this one combination and when I saw it I was like, ‘I’m the better fighter here, let’s go for it.’ And then I was able to finish him. I was expecting him to hit more powerfully.

“Light-Heavyweight is definitely the right weight for me. This division never used to be so stacked, so I used to fight at Heavyweight because that’s where the money was. But now I’m fighting at 209lbs/95 kilos and it feels great.

“I notice when I am training with guys this weight that they don’t have the same kind of power as the Heavyweights. I especially notice it in the clinch, they weigh less and I feel strong.”

Jurkovic was glued to his television screen for the GLORY 15 ISTANBUL Light-Heavyweight Championship Tournament last month. Spong and Saki won their semi-final bouts to meet in a highly-anticipated rematch in the final.

Unfortunately it ended quickly. Spong threw a hard outside low kick early in the first round and Saki blocked with his knee. Spong’s shin lost the encounter; the fibula and tibia broke through and left Spong on the mat in agony.

“Saki had a win over Spong but KO in 2009 but since then Spong changed a lot. So they met in the final as expected and it looked like it was going to be an interesting fight, but then it ended early with that injury,” Jurkovic says.

“That was a shame; I was hoping for a longer, more decisive fight. But, these things happen in fighting. He will be back.”

Saki came away with the World Light-Heavyweight Title, GLORY’s first champion at this weight. Obviously a title shot is what Jurkovic and the rest of the division are working towards, but he isn’t about to start calling out the top dogs just yet.

“I like Saki, he’s a good fighter and nice guy. Would I fight him? Of course I would, ha! But before I can talk about fighting guys from the top five I need to get some wins in this weight class, starting with Artem Vakhitov this Saturday,” he says.