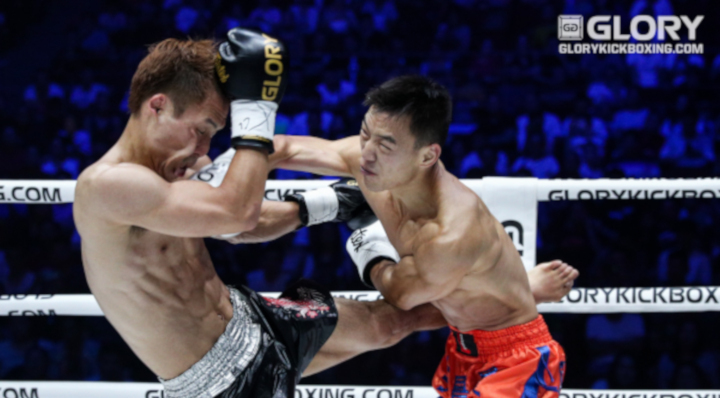 The GLORY 57 SuperFight Series hosted a rematch from GLORY 46 in Guangzhou, as Chenchen Li (28-6, 15 KO’s) sought to even the score with Japan’s Masaya Kubo (17-9-1, 5 KO’s). Kubo knocked out Li in the first round in the pair’s previous meeting.

Li went to work early with body kicks. Kubo stayed inside the pocket, firing kicks of his own from the southpaw stance.

Li cracked Kubo in the cup with a kick, prompting a delay in the action as the Japanese fighter recovered.

On the restart, Kubo looked to land his left body kick, but Li was able to counter it well with his straight right hand. His patience allowed him the opportunity to score effectively off of Kubo’s offense.

A straight right hand from Li had Kubo on rubber legs to open the second stanza. Despite the heavy shot, Kubo was able to clinch and recover. The referee warned Kubo to stop clinching soon after.

Li fired a flying knee, but Kubo was able to evade. A left hook from Li found its mark, prompting Kubo to respond with a series of head kicks in the corner. Li again clipped Kubo with a left hook, but the Japanese fighter was able to stay on his feet.

Kubo launched body kick after body kick in the opening seconds of round three, but Li blocked them with his forearm. The pace slowed as both fighters frequently clinched. The referee took a point from Kubo for holding.

Kubo desperately sought a finish late in the fight, begging for a knockdown, but it never came.

The judges returned a unanimous verdict in favor the Chinese fighter, Li, who rebounded from the loss in the pair’s first encounter.

“My performance was not perfect. I wanted to knock him out,” said Li following the win.