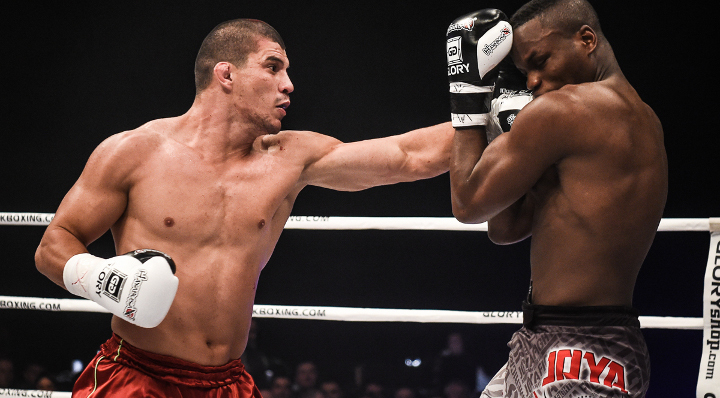 Brazilian light-Heavyweight contender Ariel Machado (45-8, 34 KO’s) thinks he will stop defending champion Artem Vakhitov (18-5, 7 KO’s) halfway into their title fight in the main event of next week’s GLORY 47 LYON event.
Machado won the GLORY 38 CHICAGO Light-Heavyweight Contender Tournament to place himself in pole-position for a shot at the Russian’s title belt. Vakhitov made his second successful defense of the belt on that card, stopping former champion Saulo Cavalari.
The only stoppage loss on Vakhitov’s record is a third-round retirement against his team mate Artem Levin, the former GLORY Middleweight champion, when they clashed in the finals of a 2010 tournament in their native Russia.
Since then Vakhitov has come to dominate his division and has gone from strength to strength. At present he is a regular feature in “pound-for-pound best kickboxer” conversations and has talked about wanting to do a champion vs. champion SuperFight with Heavyweight king Rico Verhoeven.
Yet Machado believes he has the answer for Vakhitov’s skills and that he can stop him before their fight enters the championship rounds.
“Vakhitov is very fast and has very good footwork, he’s a very tough fighter,” he says.
“But I want to stop him in the second or third round, I think I see the way to do that. He hasn’t faced a fighter like me yet. I am smarter than him and I am stronger than him. I will go through the holes in his defense, stop him and take the belt back to Brazil.”
If Machado can succeed against Vakhitov he will become the division’s second Brazilian champion. The aforementioned Cavalari was first, winning the vacant title in a 2015 fight with Zack Mwekassa. He then lost it to Vakhitov at GLORY 28 PARIS in March 2016.
GLORY 47 LYON takes place in the southern French city of Lyon on Saturday, October 28 and, in addition to the main event title fight, features former Welterweight champion Cedric Doumbé taking on domestic rival Yohan Lidon in a battle to prove which of them is France’s top Welterweight kickboxer.