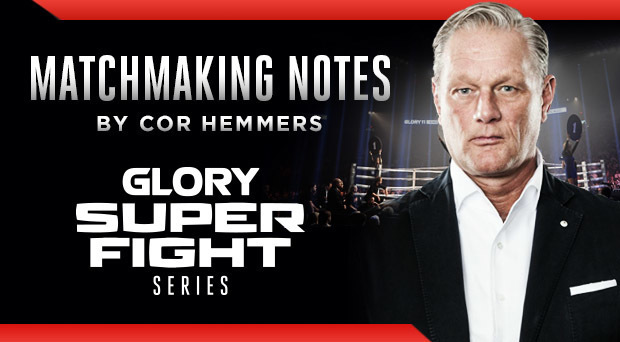 Six fights in the GLORY SuperFight Series will open the event. The line-up features top contenders, rising stars and new signings all looking to score big wins and earn the points which will take them up the rankings and into title contention.

Cor Hemmers. GLORY Matchmaker and Head of Talent Operations, breaks down the fights that make up GLORY SuperFight Series 14.

This is an interesting fight and it is important for Murthel because he has something to prove. In 2012 he was the K-1 MAX champion but then he moved to GLORY and he has found it hard with the top fighters, he’s had some losses.

Now he’s facing a very good fighter in Beqiri and I think Groenhart has to win. If he doesn’t, I think he will have to consider whether he has a future at 70kgs or whether he should move up in weight.

Kyshenko is a very good fighter and he made a solid debut at GLORY 13 against Kenmun, he was explosive and he showed his skills.

Karapetyan is a machine, he just racks up points. He can sometimes be surprised by fighters who have good timing and Kyshenko is one of those guys.

You’d have to expect either a stoppage win for Kyshenko or a decision win for Karapetyan.

Jurkovic is dropping down from Heavyweight, as Duut did.

Duut has knockout power in both fists, he is a forward-pressure fighter and very aggressive. So either he gets Jurkovic or Jurkovic is able to use his timing and take Duut out.

I would be very surprised to see this fight go the distance, both of these guys are always looking to finish a quickly as possible.

Aikpracha is one of the best talents in Thailand right now. The question is whether he can come from Muay Thai to fight under GLORY rules, where we don’t allow elbows and we also have a limited clinch.

Aikpracha is very good with all his weapons, a lot of people are very interested in this fight.

Kraus has lost a couple of recent fights and really needs to bounce back. He has to prove something here. This is a good fight for him, having that boxing style and being the first to welcome Aikpracha to fighting for GLORY.

If Kraus wants to get back into the contender conversation then he can’t really afford to lose here.

After his last fight Wilnis told GLORY he would be doing a lot of work on his explosiveness and his power. I think those are the areas he needs to address if he wants to stand out and make a name in this division.

Brestovac is a champion in Croatia, he is a big guy with a lot of power and this is chance to impress in GLORY.

Jamal Ben Saddik has been forced to withdraw from a Heavyweight bout with Benjamin Adegbuyi on this card after suffering a broken hand in training. A replacement opponent for Adegbuyi is being finalized.