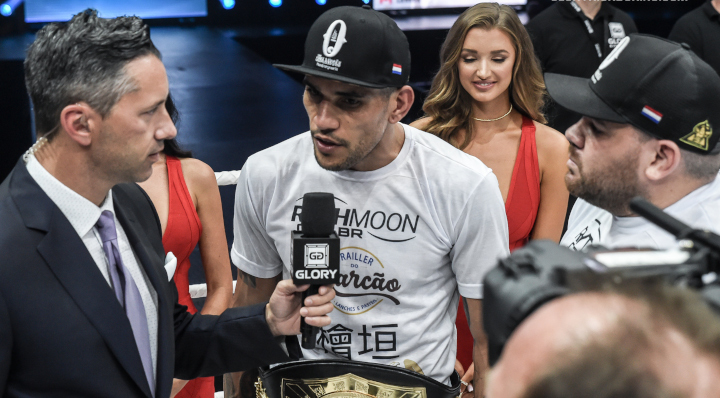 Pereira calls out Wilnis, Vakhitov “and anyone else with the guts”

Having signed a new long-term GLORY contract last week, the GLORY world Middleweight champion wants to settle some scores and solidify his legacy over the coming year.

Pereira (29-6, 17 KO’s), currently riding a four-fight win streak, is keen to avenge some early career losses to Wilnis (31-9-1, 9 KO’s) before moving up in weight to challenge current GLORY light-Heavyweight champion Vakhitov (20-5, 8 KO’s) and attempting to become the first fighter in GLORY history to hold belts in two weight classes at the same time.

“I’ve got two losses to Wilnis, one in 2012 and one from GLORY 20. These losses were both early in my career and while I don’t want to take anything away from him, I was not a complete athlete at the time,” he says.

“We were both in Chicago for GLORY 58 and we talked a lot. He’s a good guy, but this all goes out the window if this fight gets made. I will knock him out so bad.

“I think he will be my next challenger. It makes sense. For me it would bring special elements, both technical and personal. Revenge is a big element but there’s more to it than that.”

As for Vakhitov, he and Pereira had been lined up to face either other last year, before Vakhitov suffered a hand injury and was forced to take time off. But the prospect of being a two-weight champion has never left Pereira’s mind.

“Now I’ve signed my new contract, I will face any fighter who has the guts for it. For me, the challenge against Vakhitov is still on the line. I have the height, reach and style to fight at light-Heavyweight.

“It would be an excellent opportunity to make history and conquer two belts at the same time. I'm totally ready for this. Vakhitov, let’s do it!”

Negotiations are currently underway for Pereira’s next title defense. Stay tuned to GLORY Kickboxing’s Twitter, Facebook and Instagram feeds for breaking news on the date, location and opponent.