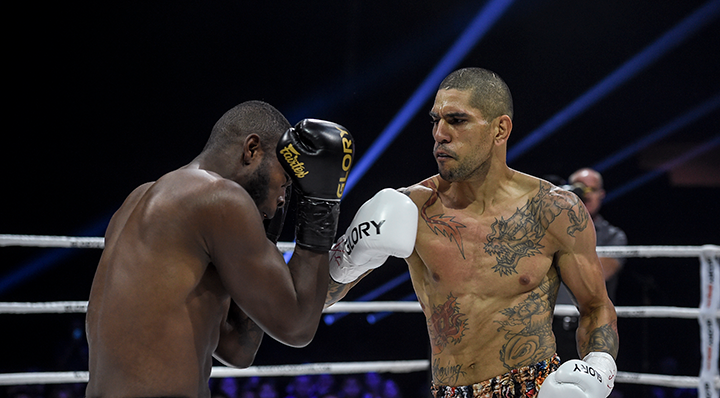 Gold was on the line in the GLORY 68 main event as Middleweight champion Alex Pereira (31-6, 20 KO’s) moved up in weight to challenge Donegi Abena (24-7, 6 KO’s) for the interim light Heavyweight title in Miami.

Pereira came out with guns blazing, swinging wildly with punches. Abena held his ground and fired back with leg kicks. Pereira slowed his attack, settling in and throwing low kicks of his own.

The pair clinched for a moment and Abena pushed the Brazilian away demonstratively, prompting a warning from the referee. Pereira connected with a knee to the body of Abena. The Suriname native scored with a left hook over the defense of Pereira. A head kick from Pereira thundered through the ring just before the round ended.

Another high kick from Pereira greeted Abena to start round two. Abena tried to fire back, but absorbed a third kick that wobbled him momentarily. A right straight from Abena backed up Pereira.

He then attacked with a combination along the ropes and caught Pereira with his chin high. The Brazilian looked hurt, but he did not hit the canvas. Pereira recovered and delivered a heavy body shot late in the frame.

Pereira switched his kicking attack to the body in round three, connecting under the left arm of Abena multiple times. The pair exchanged low kicks as the output slowed. A left hook from Pereira hurt Abena and he quickly followed it with a knee.

The flurry resulted in a knockdown and bloodied the nose of Abena. When the fight resumed, Pereira landed a devastating counter left hook that sent Abena crashing face-first to the mat and the referee immediately halted the bout.

“This fight was very important to me. I wanted to leave my mark. Abena is a very tough opponent,” said the new, two-division champion. “He had to come close to me and my hands hit much harder.

“I don’t care who I fight next, but put me on the Collision 2 card in December.”