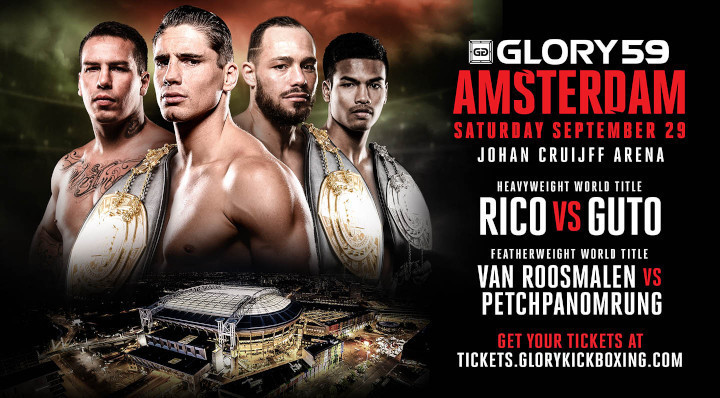 The challenger hoping to halt Verhoeven’s unprecedented championship reign – which began in June of 2014 – will be dangerous striker Guto Inocente (35-8, 17 KO, fighting out of Brazil).

Verhoeven has won an astounding 16 fights in a row inside the GLORY ring, crafting a resume that includes victories over legends such as Badr Hari, Peter Aerts, Daniel Ghita and Gokhan Saki, as well as contemporaries Benjamin Adegbuyi, Jamal Ben Saddik, Errol Zimmerman and Mladen Brestovac.

Brazil’s Inocente has only tasted defeat once since joining GLORY and his wins against top contenders Benjamin Adegbuyi, D’Angelo Marshall and Hesdy Gerges have vaulted him to No. 3 in the Heavyweight rankings.

Fans in attendance at GLORY 59 Amsterdam will also witness the crowning of an undisputed Featherweight king, as the division’s two-time champion Robin “Poker Face” van Roosmalen (40-7, 21 KO, fighting out of the Netherlands) returns to take on interim champion “The Professor” Petchpanomrung Kiatmookao (160-36-2, 27 KO, fighting out of Thailand) in the night’s co-Headline bout.

Van Roosmalen is one of GLORY’s most decorated champions, amassing a 16-3 record within the promotion and having the distinction of being the only GLORY athlete to capture world titles in two weight classes – Lightweight (once) and Featherweight (twice, including his current reign).

With Van Roosmalen sidelined due to injury, Kiatmookao, better known as “Petch” defeated former interim champion Kevin Vannostrand last month at GLORY 55 New York to earn his own interim Featherweight title. The 23-year-old Thai fighter will be looking for revenge against Van Roosmalen, the only man to defeat him in eight appearances under the GLORY banner.

Fresh off a win at GLORY 56 SuperFight Series less than two weeks ago, Dutch-Curaçaoan contender D’Angelo Marshall (18-3, 10 KO, fighting out of the Netherlands) sets his sights on recent Heavyweight title challenger Jamal “The Goliath” Ben Saddik (31-7, 25 KO, fighting out of the Netherlands), a Belgian behemoth of Moroccan descent. This match-up of Marshall and Ben Saddik will have significant stakes for the division, with the heavy-handed foes currently ranked No. 2 and No. 9 respectively.

The four-fight GLORY 59 Amsterdam card can be found below:

GLORY 59 Amsterdam will be carried:

Groenhart is currently ranked No. 3, returning for the first time since dropping the Welterweight title in February, while Jaraya earned his top-10 ranking by defeating Miles Simson in his GLORY debut.

Sticking to the 170-pound division, No. 2 contender Alim "Professor" Nabiyev (49-7, 21 KO, fighting out of Russia) attempts to rebound from his first GLORY loss, taking on No. 4-ranked Eyevan "Mister Cool" Danenberg (28-6, 13 KO, fighting out of the Netherlands), who enters the contest on a four-fight winning streak.

Nabiyev, only 23 years old, strung together wins over Jimmy Vienot and former champions Nieky Holzken and Cédric Doumbé before dropping a decision to reigning Welterweight king Harut Grigorian in June. Only 26 years old himself, Aruba's Danenberg last appeared at GLORY 51 Rotterdam in March, defeating both Vienot and Thongchai Sitsongpeenong during a one-night Welterweight contender tournament.

Heavyweight slugger Daniel “Dee Dee” Skvor (25-7-2, 18 KO, fighting out of the Czech Republic) will welcome Roël Mannaart to the GLORY ring for his promotional debut.

Following a win over Bailey Sugden at GLORY 52 Los Angeles in March, Featherweight prospect Zakaria Zouggary (31-4-1, 15 KO, fighting out of the Netherlands) returns to meet Muay Thai practitioner Aleksei Ulianov (23-5-1, 7 KO, fighting out of Russia) in the opening bout of GLORY 59 SuperFight Series.

The five-fight GLORY 59 SuperFight Series card can be found below:

The four-fight GLORY 59 preliminary card can be found below:

Streaming details for the GLORY 59 prelims will be announced shortly.

Tickets for GLORY 59 Amsterdam (including access to GLORY 59 SuperFight Series and the GLORY 59 prelims) are on sale now and available for purchase at tickets.GLORYkickboxing.com.

GLORY 59 Amsterdam will be the promotion's final stop during the Summer of GLORY 2018, a five-city campaign that will have included events in New York, Denver, Shenzhen (China), Chicago and Amsterdam.

For more information about GLORY and Summer of GLORY 2018, visit GLORYkickboxing.com.