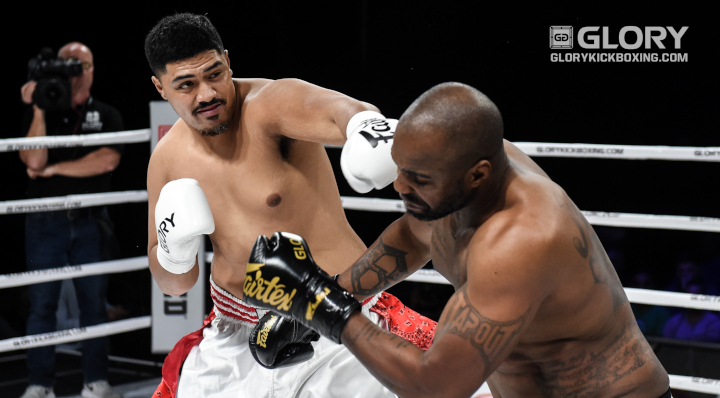 Tafa: “I picked a fight with Jamal Ben Saddik because he’s dangerous"

It took Jamal Ben Saddik just 57 seconds to knock D’Angelo Marshall down three times and end their GLORY 59 fight by way of TKO.
It’s one of the quicker finishes in GLORY history, but Junior Tafa doesn’t see what the fuss is about.
“D’Angelo Marshall is not a good fighter. D’Angelo Marshall closes his eyes and throws straight punches going forward. My little brother can knock D’Angelo Marshall out,” he says.
“Don’t bring up D’Angelo Marshall, I’ll knock him out easily. Really he’s not been that good. [Jamal] talks about [stopping] D’Angelo Marshall? Come on bro, I’ll smash him, just like I’ll do to Jamal.”
Last week a draw was held in Amsterdam where the four unseeded fighters in the eight-man Grand Prix drew lots to determine which of them would get first pick of vacant quarter-final slots to drop into.
Tafa got to choose between slots opposite Benjamin Adegbuyi, Jahfarr Wilnis and Jamal Ben Saddik. He chose to go with Ben Saddik, a move that surprised some people.
“The thing is, no one wants to fight Jamal, because he’s the scariest man there. I’ve never been a fearful man, I’ve lived around dangerous men my whole life,” he says.
“Obviously, I chose Jamal because no one has the balls to choose him. I chose him because it will be an entertaining fight and I’m here to entertain.
“I think Jahfarr Wilnis is the best fighter here. I like him and his style of fighting, he’s very entertaining to watch and like watching him. Out of anyone in the Heavyweight tournament, he’s the best. But I chose Jamal, because I think our styles are good and I wanna knock him the f*ck out.”
Tafa also says that he wants to meet Guto Inocente in the semi-finals if possible because ‘we have unfinished business [from our GLORY 50 CHICAGO fight].”
He also gave his thoughts on taking part in an eight-man Heavyweight tournament of the kind in which his mentor Mark Hunt made his name.
“The most beautiful thing about Heavyweight tournaments is that anything can happen. Everyone has a puncher’s chance.
“I’m happy to bring back to old Heavyweight tournament. We’re gonna make some noise and entertain the crowd!”
The eight-man Heavyweight Grand Prix takes place this Saturday, December 8 at the Ahoy Arena in Rotterdam, Netherlands as part of GLORY 62 ROTTERDAM.
The tournament winner will receive a $100,000 cash prize.