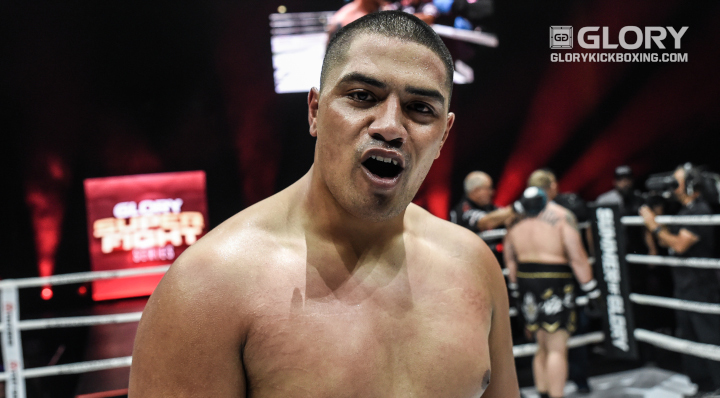 Tafa: ’None of my tournament fights are going more than one round!"

“Each one of my tournament fights is not going more than one round, trust me,” snarls Junior Tafa down the phone from his training camp in Phuket, Thailand.
“I am going in there to clean these guys out. After this tournament, my name will be up there with guys like Mark Hunt and Badr Hari. That’s what I want - people don’t know my work yet, but they will.”
Hunt, ‘The Super Samoan’, is a mentor and training partner of Tafa’s, recruiting him to his team after seeing the-then 17-year-old Tafa win by knockout at a show he was attending.
Since then Tafa has formed part of Hunt’s ‘Team Juggernaut’ camp, which is loosely based in Adelaide, Australia, but in practice is more of a traveling band of warriors which goes wherever Hunt goes.
For the last two months they have been on the island of Phuket in Thailand. Alongside Hunt and Tafa are UFC Heavyweights Tai Tuivasa, Tyson Pedro and several others.
Hunt has been training for his UFC FIGHT NIGHT showdown with Justin Willis in Australia this coming weekend, while Tafa has been training for the eight-man Heavyweight Grand Prix at GLORY 62 ROTTERDAM next weekend, Saturday December 8.
With Hunt having won the 2001 K-1 Grand Prix and taken part in several other Grand Prix events, did he have any useful insights for Tafa, who is heading into the first eight-man tournament of his career?
“Yeah - Mark has been conditioning my head to take big shots,” jokes Tafa.
The team are notoriously hard-sparring, something which Tafa feels is useful both in the physical and mental side of his preparations.
“My mindset is that I want a war, I want a rumble. I’ve not been happy with my last couple of GLORY fights just because I feel like they didn't come to fight. They just quit on me and fell over,” he says.
“But in this tournament it won’t be like that, everyone is coming to fight - I hope.”
Numerous top Heavyweights are in the starting field, including Tafa’s old foes Benjamin Adegbuyi and Guto Inocente. But his eye is not on rematches with either of them.
“Adegbuyi is the favorite obviously, he’s the best guy in the tournament,” he says.
“Inocente, if we meet in the tournament he’s getting cleaned out. Mark my words, if we fight he’s getting knocked out. But I’m not so interested in him anyway, he’s boring - jab, clinch, jab, do a bit of spinning.
“The fight I am really interested in is Ben Saddik, that’s the guy I most want to fight. Imagine that. He comes to bang, I come to bang. I think people would love that fight. He’s a big kicker but he can’t kick me when I am right up in his face, y’know?
“Or another good fight I think would be Jahfarr Wilnis because he’s like me, he never takes a backwards step. So both of those are fights I am really interested in but basically yeah, anyone who crosses my path on the night can get it.”
GLORY 62 ROTTERDAM takes place Saturday, December 8 at the Ahoy Arena in Rotterdam, Netherlands.
TICKETS AVAILABLE HERE