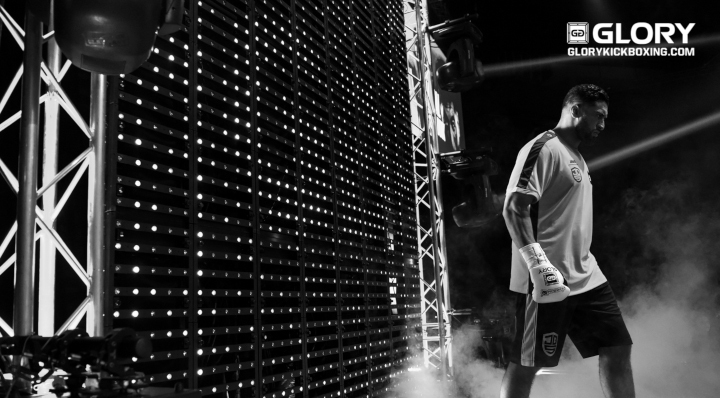 The biggest fight of Jamal Ben Saddik’s life has been taking place outside the ring.
Back in 2012, the Belgian Heavyweight discovered that he was suffering from thyroid cancer. He underwent surgery and treatment, but has to be closely monitored for ten years following the diagnosis.
Monitoring takes place via blood analysis, which measures the levels of certain markers in the blood and this week, days out from facing D’Angelo Marshall (18-3, 10 KO’s)  at GLORY 59 on Saturday night, Ben Saddik (31-7, 1 NC, 25 KO’s) received news that the tests showed his markers to be at their lowest levels ever.
Ben Saddik has five more years of regular testing to undergo; so long as those tests continue showing the markers at this low level, he will be declared officially cancer-free.
The latest test results have buoyed him as heads into this weekend’s showdown with Marshall. The past five years have been mentally strenuous for him and at times have had him feeling like he was staring into the abyss.
“[It was discovered when] I went for a sports massage. The masseuse found a lump in my neck and insisted that I should get it looked at,” Ben Saddik recalls.
“Well, I had already noticed it before then, but I was just kind of ignoring it, I thought it would just go away. But I went to the hospital and they did some tests and took some samples.
“A week later I was on the beach in Morocco when they called me and said the results weren’t good and I needed to come back and see them. This was a few months before GLORY 4 TOKYO.
“They said I had to have the lump removed immediately but the tournament was so important for my career I asked them to wait until after it. The professor agreed, but only on condition that I came for tests every two weeks until leaving for Tokyo.
“When I came back I had it removed. At that time, some doctors were saying to me that I needed to stop kickboxing. They said it wouldn’t be possible for me to continue training and competing, even when the thyroid cancer was treated.
“Well.. when they told me I had cancer, it was bad news of course, but you come to accept it. But when they were telling me that I had to stop with kickboxing, that I didn’t want to accept. I can accept everything but not that.
“Kickboxing is everything to me. I grew up with it. I have such nice memories of it and it’s been such a part of my life. I do kickboxing with love. Really! I love doing it.
“One time I worked one week in a factory. I hated it; it was the hardest week of my life. Not in a physical way, but just mentally. It was just depressing. It was the most difficult week of my life; it just was not the life for me.
“So when they were saying it needed to stop, I couldn’t imagine life without it. What would I do? I had spent my life in kickboxing. How could I go and get some normal job?”
Ben Saddik refused to quit his sport. Over the following years he had ups and downs, both in his career and in his health, but kickboxing remained his life. Ironically, his career-best performance - a December 2017 fight with Rico Verhoeven - came at the same time as a worrying backslide in his tests.
“Before the Rico fight I was feeling great, the best shape of my life. I felt really 100% ready for that fight but the test results said something different,” he says.
“But if I could back, I wouldn’t really do anything different in that fight. People say I should have tried to finish him off in the first round but they don’t understand, you have to be careful with your energy in a fight. I didn’t see the opening for him to be finished off otherwise I would have done it.
“[The GLORY 53 loss to] Wilnis was different; I made the mistake of underestimating of him. I was thinking that I was coming off fighting Rico for five rounds so how hard could Wilnis be? I looked at some fights of his and I thought he would be an easy fight for me.
“But in the first round I hit him with so many things and he didn’t go down and that made me think wow, what is going on here? And so then from the second round I was fighting against myself, because I wasn’t sure what to do next.
“Well I’ve not made that mistake with D’Angelo Marshall. I am confident and I am going for the knockout like always, but I am not underestimating him.
It’s not going to be a fight where I go forward for one round and then run out of gas or stop going forward. I am going to give people what they want to see, which is also the best way of fighting for me.”
“If I win, I won’t call for a rematch with Rico because I think its too early. Benjamin Adegbuyi is a good fighter, he’s ranked #1, but I have someone else in mind. It’s a fight I have wanted for a long time and I hope he is going to accept it I I call him out. So, we will see on Saturday.”