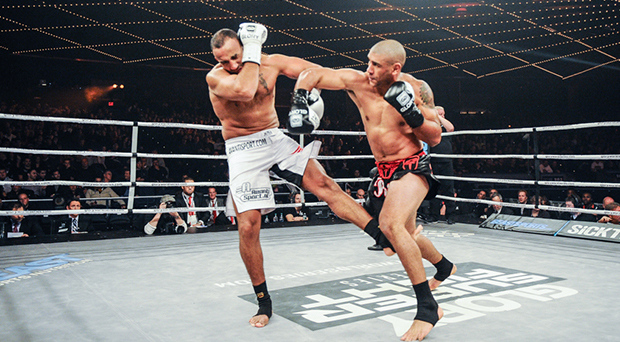 The Breakthrough Fighters of 2013

New talent is the lifeblood of any sport and that is especially true in the combat world - the rising stars of today are the icons and champions of tomorrow.

So many new fighters stood out in 2013 that it would be impossible to mention them all in one piece. Here we’ve picked one fighter from each weight class who had a breakout year in 2013 - which of them would you pick as the Breakthrough Talent of 2013?

Verhoeven was actually the least-known fighter in the line-up so it was nothing short of astonishing when he beat tournament favorite Saki in the semi-finals then took a decision over Ghita in the final in a Fight of the Year contender.

He is a big young man but Verhoeven doesn’t rely on that. He has a very intelligent and technical game, and there is maturity in his performances, which belie his 24 years of age. We also saw that in his GLORY 13 TOKYO win over Peter Aerts (103-31-1, 78 KO‘s).

Cross-training with professional boxers such as Tyson Fury benefited Verhoeven’s hands, footwork and head-movement enormously. The way Verhoeven moves and uses his brain marks him out as a frontrunners in the new breed of Heavyweights.

Cavalari was an absolute unknown outside of the Brazilian kickboxing scene when he signed to the GLORY World Series in early 2013.

His home city of Curitiba also produced legendary MMA fighters such as Wanderlei Silva, Mauricio ’Shogun’ Rua and Anderson Silva. The region has a strong heritage in the striking arts, so hopes were high.

Cavalari did not disappoint. He dominated the much more experienced Filip Verlinden (41-11-1, 16 KO’s) at GLORY 11 CHICAGO then made himself a contender for Knockout Of The Year when he inflicted a frightening stoppage on the veteran Mourad Bouzidi (75-22-2, 34 KO’s) at GLORY 12 NEW YORK.

He faces Spong in the semi-finals and if he wins, Brazil will have itself a new superpower in the light-Heavyweight division.

It was hard to choose between Joe Schilling (16-5, 10 KO’s) and Wayne Barrett for this one.

Schilling had a huge year both for himself and American kickboxing, planting the Stars and Stripes on the world stage by way of a world-beating performance in the GLORY 10 LOS ANGELES Middleweight Championship Tournament.

However, Schilling had been a big name on the US circuit for some time prior to the Los Angeles event. Barrett, on the other hand, came into the GLORY ranks with a solid amateur record but little professional experience.

Stoppage wins over the previously undefeated Mike Lemaire (now 8-1, 4 KO’s) and MMA fighter Robby Plotkin (1-1 kickboxing) took Barrett into a GLORY 12 NEW YORK showdown with Schilling, who was favorite to win given his more extensive record and the fact that he was coming off the tournament win.

The fight was a tough one, hard-fought and very close. Both fighters knocked each other down and came close to scoring a finish, but couldn’t quite land the telling blow.

In the end a razor-close decision went to Barrett, setting up a US Middleweight rivalry with Schilling which looks set to run and run.

Of all the new talents who emerged in 2013, none did so in more explosive fashion than Toronto, Canada’s ‘Bazooka Joe’.

A well-rounded kickboxing talent with an explosive punching and kicking game, Joseph Valtellini’s coach Paul Minhas - former trainer of Gary Goodridge - has channeled his own obsession with low-kicks into him.

Valtellini is lethal with the low-kick, as overwhelmed opponents such as Francois Ambang (11-3, 3 KO‘s) and Murat Direkci (69-17-2, 57 KO’s) found out the hard way, the latter’s corner being forced to stop the fight.

A 3-0 run in GLORY, all by way of stoppage, took Valtellini into the fight with Raymond Daniels (24-1, 14 KO’s) in the semi-final of the GLORY 13 TOKYO Welterweight Championship Tournament.

Trademark low-kicks took away the karate master’s evasiveness and allowed him to be stopped with a high kick in the third round, sending Valtellini into the final against Nieky Holzken (84-11, 44 KO’s).

Things started well but fell off when Holzken hurt Valtellini with body shots before scoring a third round finish of his own. That was a disappointment for the Canadian-Italian but in 2014 he will make another run at that #1 spot.

Each fight is a learning curve and he came away from the Holzken encounter with a lot of things to work on. It would not be surprising to see body-shots become an increasing part of his arsenal when the new season kicks off.

Opinion was sharply divided on Ristie’ contender status when he joined GLORY. The consensus was that he had potential but had yet to prove himself against top-ranked opposition.

Over the course of an incredible 2013, Ristie silenced his doubters.

First he scored the biggest win of his career to that point when he knocked out Albert Kraus (73-17-3, 43 KO’s) in Japan by way of his signature knee strike to the head.

Then he took a win over Danish Muay Thai champion Niclas Larsen (39-7-1, 19 KO’s), to book a spot in the GLORY 12 NEW YORK Lightweight Championship Tournament.

Ristie was the underdog by far, especially as he faced the Giorgio Petrosyan (78-1-1, 35 KO’s) in the semi-final. So when he shut the Armenian-Italian maestro down before KO’ing him, jaws dropped around the world.

He wasn’t done there. Ristie met Robin Van Roosmalen (31-6, 19 KO‘s) in the final and did the same to him, proving that it was skill and not luck that had carried him to the top.

Being a late starter in kickboxing - he only began training in his mid-20s - means that Ristie’s learning pattern has been unique.

Adults tend to have their own ideas about how to do things and in Ristie’s case that has translated into a very personalized, unorthodox style, which makes him hard to predict.

Ristie has now proved he is a top talent. In 2014 he will look to hold on to that status.

Petrosyan, Van Roosmalen and all the top Lightweights are coming after him, starting with a March 8 fight against Davit Kiria (21-9, 6 KO’s) at GLORY 14 ZAGREB.

The 20-year-old Noiri’s nickname is ‘Amazing’. That’s a pretty serious label to live up to, but in this instance it is well deserved. Noiri is an incredible talent, one of the most creative kickboxers out there today.

Tall for the weight class, he is able to use his range to stay out of harm’s way and land on his opponents. But he also likes to get in close and here he can do serious damage - his left knee is one of the most devastating weapons in the Featherweight class.

Because of his long legs, Noiri can land knees to the head with ease. He lands them from all angles and will often pull off a flying knee while standing against the ropes, covering up under an opponent’s barrage. Usually he has baited them into this position so he can then take them out.

He is improving every year and it is possible he will become the #1 Featherweight in 2014. Even Kubo, the current #1, has said that Noiri’s ascendance is inevitable.

Our next event is GLORY 14 ZAGREB on Saturday, March 8.

The event, which airs on SPIKE TV in the USA, takes place in Zagreb, Croatia and features a four-man Middleweight Contender Tournament plus a Lightweight World Championship Title Fight and a Heavyweight bout between Mirko ‘CroCop’ Filipovic and Remy Bonjasky.