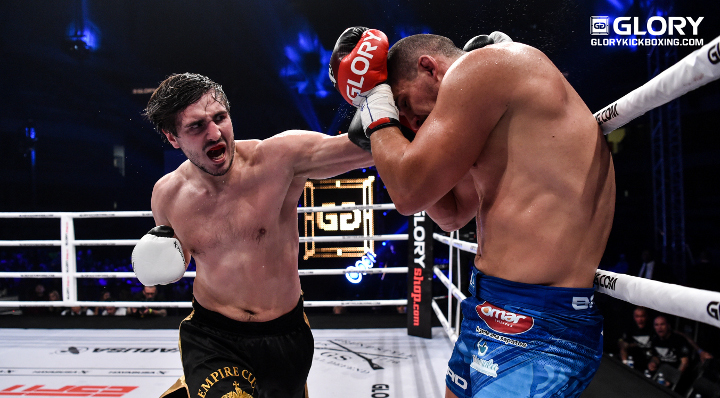 Vakhitov on fights with Zhuravlev, Verhoeven and Badr Hari

A title unification bout with interim champion Pavel Zhuravlev is the obvious first step for light-Heavyweight champion Artem Vakhitov when he returns to the ring, but the Russian also has his sights on some bigger game.
“Pavel Zhuravlev is a temporary champion, pretender to the belt. A title unification fight with him is only a matter of time and place, this is obvious to everyone,” he says.
“But in addition to this mandatory defense of the title, it would be interesting for me to meet the strongest fighters. This includes fighters from theh Heavyweight category like Badr Hari, and Rico Verhoeven, Benjamin Adegbuyi, Mladen Brestovac.”
Vakhitov has been absent from the ring since his title defense against Ariel Machado in October 2017. In that fight he retained his title but suffered another break to his right hand, the second such instance during his GLORY tenure.
That October bout was in itself a comeback from injury, his right hand having broken badly in February 2017 in the process of him stopping former champion Saulo Cavalari with it.
When it became clear Vakhitov would be out for some time, GLORY implemented an interim championship. Zhuravlev won it at GLORY 43 and a title unification bout has been on the cards ever since. Vakhitov isn’t convinced of Zhuravlev’s championship credentials though.
“Let me remind you, the real GLORY world title is only won in a five-round fight. All four of my title fights have been fought under that condition.
“I understand that temporary belts are sometimes necessary to maintain momentum in a division when a champion is injured.  This is common practice of course; it also occurs in professional boxing.
“But is Pavel even still the temporary champion? He won the belt - over three rounds, not five - at GLORY 43 and then I came back at GLORY 47 and defended my belt. Therefore, I do not understand how Pavel can be considered a champion. I’m the champion of my division.”
Zhuravlev fought at GLORY 52 LOS ANGELES last month and in his pre-fight interviews he took issue with Vakhitov’s callouts of Heavyweight fighters such as Rico Verhoeven and Badr Hari, stating that first Vakhitov must deal with him.
“As a champion, and one who has repeatedly defended his title, it is legitimate for me to desire fights with the top fighters. And I do not doubt that such meetings will be of interest to the fighters, promoters and the public,” says Vakhitov.
“Many professional boxers in their time did the same: Oscar De La Hoya, André Ward, Roy Jones, Floyd Mayweather, Manny Pacquiao and others, all fought up in weight.
“I am of course interested in the strongest fighters of the organization of my weight category, including those with whom I have not yet fought. I am ready to answer any challenge.
“I would not mind meeting Tyrone Spong, who also said he did not mind returning to GLORY for the sake of fighting me.
“Badr Hari is a legend, a superstar from K-1 days and beyond. I'm very interested in him as a fighter (fan) and I would like to try my hand at fighting with him.”
When Vakhitov first called out Rico Verhoeven for a champion vs. chamion showdown, some fans commented that Vakhitov would be too small to face him.
“In order to answer this question of whether I can compete with Heavyweights I must hold at least one fight in this category and thereafter I can say whether I can compete regularly in that category or not,” is Vakhitov’s answer.
“But in the history of this sport and this weight class, fights between fighters of different size have repeatedly taken place within the organization. For example, Gokhan Saki fought with Semmy Schilt at GLORY 4 and Rico Verhoeven at GLORY 11 and we have also seen Tyrone Spong fight with Alistair Overeem.
“So I think, under certain circumstances, such fights may well take place.”
GLORY’s next event takes place Saturday, May 12 in Lille, France and features Lightweight champion Sitthichai and super-bantamweight champion Anissa Meksen.