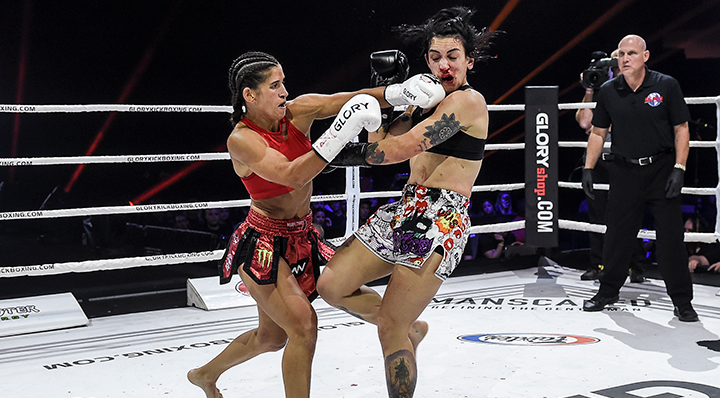 After trading low kicks, van Soest looked for a head kick. Menezes walked right through it and flurried with punches. A right hand from the Brazilian just missed as van Soest rolled away from the punch.

Van Soest used the aggression of Menezes against her, landing short strikes from close quarters. A teep from van Soest found the face of Menezes and drew a response from the Florida crowd. A counter left from van Soest caught Menezes clean as she came forward late in the round.

Van Soest picked up her output to open round two. She caught Menezes with a leg kick and another left hand to keep the fight at range. Van Soest followed with a body kick and more punches. Blood poured from the nose of Menezes.

The Brazilian started headhunting as she struggled to find van Soest with her punches. The footwork and head movement of van Soest were on full display as she evaded the offense of Menezes and countered from the outside.

A stiff jab from van Soest greeted Menezes in round three. It was followed by a slapping head kick, but Menezes took it well. Van Soest switched her attack to the midsection of Menezes. A knee hurt Menezes and she dropped her right hand to cover the damaged area.

The clean boxing of van Soest frustrated the Brazilian, prompting her to clinch. Van Soest delivered another heavy knee on the break. Menezes never quit, but the fight clearly belonged to van Soest.

Reading the scorecards was a formality, as van Soest swept the fight from every judge.

“There’s levels to this and I’m at a different one,” proclaimed the former titleholder van Soest. “I want my belt back!”