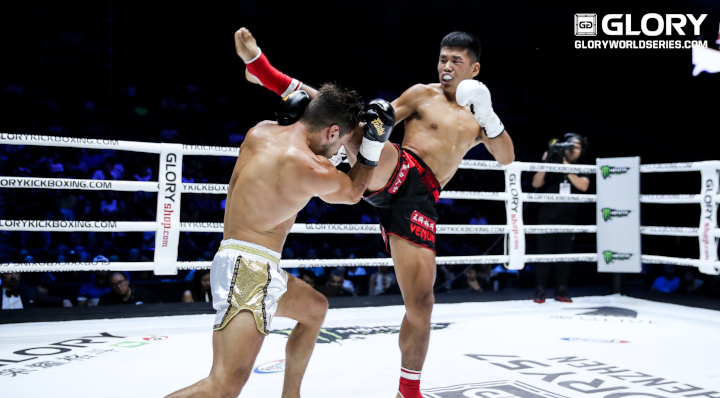 Bilalovski wasted no time attacking with kicks, nearly catching the hometown fighter with a right hand kick just seconds into the bout. Zhang was able to block the strike and settle into the fight.

A low blow from Zhang pause the action for a moment, but Bilalovski was able to continue. Zhang looked for a flying knee against the ropes, which was answered with a spinning heel kick from Bilalovski.

The length advantage of Zhang was apparent, as he was able to keep Bilalovski at range. Zhang threw a head kick, which Bilalovski blocked, and Zhang quickly fired off a spinning backfist.

The heavy strike caught Bilalovski on the jaw - but it was the forearm, not the fist, of Zhang that sent Bilalovski crashing to the canvas unconscious.

When the finish was reviewed by officials, it was confirmed that the strike was against the rules and the bout was ruled a no-contest.

“I respect the decision from GLORY,” said Zhang after the outcome, his measured words open to any amount of interpretation from the literal to the sarcastic.